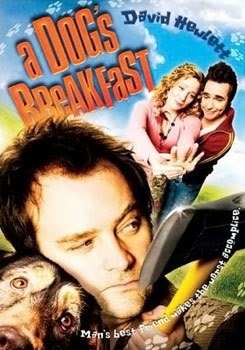 This quirky Canadian comedy is the work of David Hewlett. He played the snarky jerk who also happened to be a clever Canadian scientist on Stargate: Atlantis. So David Hewlett wrote, directed, and stars in a film where he plays a snarky psychopathic jerk who lives in Canada. I am starting to see a pattern here. This is A Dog's Breakfast.

It is nearly Christmas somewhere in rural British Columbia and we are introduced to the main character Patrick. Patrick is a man who is trying for the platinum medal in being an awkward jerk and is upset that the judges will only give him a gold medal. He also lives with Mars the dog, the only character in this movie that is completely normal.

The conflict in this film comes by the way of a phone call from Patrick's sister Marilyn (played by his sister in real life). She tells Patrick that she has a surprise for him and that she will be coming to see him soon. When Marilyn arrives Patrick notices a stranger following his sister. So he does what any protective older would do in this situation, he knocks the guy out with a cricket bat. This is how Patrick meets his future brother-in-law Ryan.

Ryan is the lead actor on a cheesy science fiction show and Marilyn is the make up artist for the same show. The two of them meet on the show and they are on the disgustingly annoying and cute phase of their relationship. Patrick is less than happy for them and sets out to just be his annoying self again. This plan is brought to a halt when Patrick overhears Ryan on the phone. The conversation Patrick hears between Ryan and whoever is on the phone leads Patrick to think two things. That Ryan is out to kill his sister and that Ryan is out to get the money from Patrick selling his parents furniture.

Not being a rational or well adjusted human Patrick decided to protect his sister by killing Ryan. Luckily for Ryan, Patrick is just as useless at murder as he is at being a well adjusted human being. Patrick tries to kill Ryan by using martial arts he learned from a gaming console, a wood cutting accident, a bathtub accident, and an electrified ladder. All of these attempts fail so fate gets involved and causes Ryan to fall off a ladder and break his neck.

Patrick's joy turns to dread as his thick brain processes that he is overjoyed that his sister's fiancé. In his own demented way Patrick does not want his sister to suffer, so he hides the body and tries to help her get over the loss she does not know about yet. Two problems arise from this, one problem is the body will not stay where he hides it and he has no idea how to deal with people. To add to Patrick's growing list of problems Mars is digging up Ryan and dragging him into the house.

To address his sister's imagined needs and to soothe his own conscience Patrick sets up his sister on a online dating site. This leads to a guy named Chris showing up for his sixth awkward date. Not wanting to be rude Marilyn agrees to have dinner with Chris while Patrick acts as a waiter for the two of them. With Patrick's conscience not bothering him, Patrick decides to go after his sister for not doing more with her life. Marilyn counters this verbal attack by pointing out that Patrick inflicted brain damage on himself by jumping off the roof in a superhero costume when he was twenty seven years old.

With Chris gone, Marilyn now knows that Patrick's weirdness is beyond what passes for normal for him. This leads to the third act twist of sorts. It also becomes darker in a way and much more funny.

Overall this is a movie worth a rental. It is twisted, dark, insane and a lot of fun to watch.


MVT: Mars the Dog. The dog is the only one in this movie that is sane.

Make or Break: The break on this film for me is the pace. There a lot slow segments filled with Patrick being a neurotic mess and it feels that the movie is dragging.