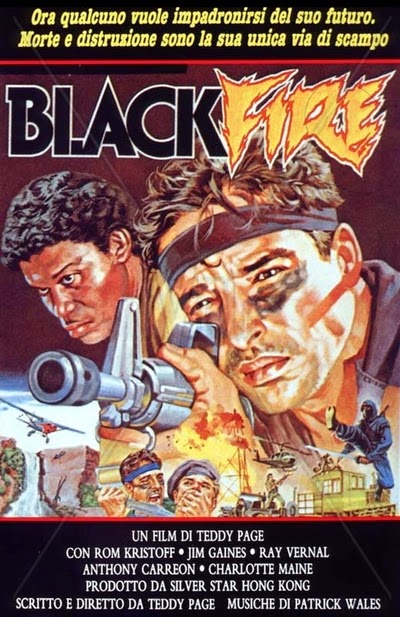 On a bright, shiny day during the Vietnam War (let’s assume it’s set during the Vietnam War for the sake of sanity), an elderly fisherman is accosted by the Viet Cong.  Luckily, Sergeant Frank Johnson (Romano Kristoff aka Ron Kristoff) and his elite team of commandos are hiding in the water, and they rescue the old man (who also happens to be working with the U.S.).  After destroying a probable P.O.W. camp (without actually checking for P.O.W.s beforehand), Frank’s team is decimated with the exception of Frank and Jim (Jim Gaines).  The two buddies are sent in an advisory (read: training) capacity to the fictitious (as far as I know) South American Island of San Sebastian, and aside from running afoul of their new commanding officer, Captain Fidel Salcedo (played by Ray Vernall, and the character is seemingly named at least partially after Juan de Salcedo, one of the conquistadors who helped colonize the Philippines for Spain in 1565; of course, this is strictly guess work on my part), Frank also finds out that there are some shady dealings happening most nights on the base.

One thing that stands out almost immediately in Teddy Page’s (aka Teddy Chiu) Blackfire is this concept of outsiders (like, say, Americans and Spaniards) intruding on/invading a small territory (like, say, the Philippines) and exploiting the local people and resources for their own ends.  So, we have Captain Salcedo and Luis Sanchez (Tony Carreon), the older plantation owner who also just happens to be a criminal kingpin.  Not only does Sanchez ostensibly harm the local folks (plantations not being known for great working conditions, though I believe his is no longer operating strictly as one), but his nefarious business dealings hurt the world outside (people looking to get heavy ordnance on the sly not being known for their good intentions toward their fellow man).  But this idea of invaders extends to the “good guys” in the film as proverbial “ugly Americans,” too.  Within the first few minutes of the film, the term “gook” Is dropped several times.  Now, this is something expected in films dealing at all with the Vietnam War from a soldier’s perspective, but the word really stands out here for some reason.  It doesn’t feel casual.  It feels pointed.  Maybe it’s the post-dubbing.  Later, Jim muscles in on a woman at a local watering hole, brushing off the man she’s sitting with (who is not her actual boyfriend, I might add) as a yokel and therefore beneath him.  Again, we expect horny guys in bar scenes to do dumb things, but Gaines carries himself with (what I thought was) a sense of arrogance that makes Jim (and by association the American troops) stand out in an unsavory way.

Another theme running parallel to this notion is one of power and corruption.  Sanchez has money (whether he earned it via the plantation or the smuggling is unclear [and immaterial]).  Money buys power.  Power corrupts.  But this is a two-way street.  Salcedo has power by outranking everyone else on his base.  Once one reaches a position like that, it only takes the temptation of money for flawed men to become evil men (we can discuss nature versus nurture some other time).  Jim and Frank are lower in rank, so they are powerless in terms of what they can accomplish within this closed system.  They can try to reach someone higher up than Salcedo, but first they would have to get past Salcedo and Sanchez’s minions, who are (assumedly) lesser in rank than Frank and Jim but corrupted by the same money and power which corrupted those above them.  Then they would have to convince whomever they can get to that their allegations are on the level (it’s easier than one might think, if this movie is any indication, but still…).  Salcedo and Sanchez’s immorality reaches further into the roots of San Sebastian, where even the prison system is set up only for purposes of torture and problem disposal (we can guess at the behest of people like Sanchez and Salcedo).  It’s the sort of prison where the warden wears an eyepatch, and the guards laugh maniacally whilst dispensing pain and degradation.  One would almost think only sociopaths work in prisons.

Interestingly, Blackfire sets up Frank to be a sort of spiritual warrior.  He has “dreams” (read: flashbacks) to his time as a youth with his ninja master grandfather (yes, really).  Set up in the classic, cinematic pattern, his Ninjitsu skills come to the fore as Frank finds himself in physical peril.  What’s more, he must be at the critical moment of said peril in order to activate his expertise.  It’s kind of like how special branches of the military are trained.  It’s not that they have so many seemingly insurmountable things thrown at them in order for them to know how to deal with each situation, because that would be impossible to accomplish.  No, they are pushed the way that they are so that when they find themselves in a crisis situation, they don’t pause to think, only to act and/or react (or at least that’s what I learned from watching The Unit).  Because Frank has these special abilities that his fellow soldiers don’t possess, he is alone even in a group.  He may lead a crack team of fighters into combat, but he is separate from them (he even uses a crossbow in the opening sequence).  This is why he lone wolf’s it while trying to get information about Salcedo’s scheme.  Even Jim is ultimately kept separate from Frank.  First, when Jim suspects his friend of being a villain (Frank is inherently untrustworthy despite what feelings of camaraderie Jim may feel for him and because of his oddness), and second, when Frank goes off solo to the final confrontation with Salcedo.  Frank opened this can of worms.  Frank has to close it back up.  Or shoot it full of lead.

This film is as simple as simple gets, in case you missed it, and like a great deal of films that came out of the Philippines, it’s dearth of scriptwriting and thespian skills shines through.  As Nancy (Chantal Mansfield aka Charlotte Maine) tries to break a computer code, she flings her head into her hands after each failed attempt, as if her dog has just been killed.  Every line of dialogue is delivered in the flattest, most declarative fashion possible.  Our hunky star is basically a slab of meat who bellows several times like Reb Brown in the classic Strike Commando.  A major plot point could never be revealed in real life, because it would bring massive repercussions down on all the major characters.  But there’s the thing.  The other half of what Blackfire is composed of (action scenes, in case you needed to guess) delivers surprisingly well.  The explosions are huge, the fire fights are tense and clearly blocked, and Kristoff is not afraid to tackle the role’s physicality; something he does quite well.  Obviously, this is no Full Metal Jacket, and Kristoff is no Gielgud, but for a straight ahead Action film, this one hits the spot just enough.  And then blows that spot up real good.

Make or Break:  The opening siege of the P.O.W. camp brings enough spectacle to keep almost any Action film fan in their seat.