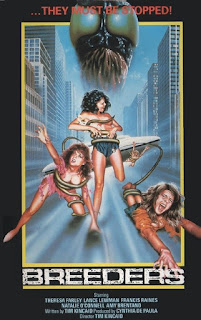 My love for Douglas Cheek’s C.H.U.D. has been well-documented for some time now.  It is, for me, the best monster movie of the Eighties this side of John Carpenter’s The Thing.  It has a strong story that’s about more than one thing.  It has excellent performances from some great character actors (including interesting cameos from the likes of John Goodman, Jay Thomas, and Jon Polito).  It has an outstanding synth score by David A Hughes which is haunting, evocative, and melancholy, as the best synth scores are.  It has excellent special effects work by John Caglione, Jr.  It should be said here that Ed French, who was a member of C.H.U.D.’s makeup effects department, not only did the makeup effects for Tim Kincaid’s Breeders (aka Killer Alien aka Breeders: La Invasión Sexual) but also appears as Dr. Ira Markham in the film (special effects artist Matt Vogel also worked on both movies).  The popping up of French on both C.H.U.D. and Breeders makes for a nice, little coincidence, because the similarities between the two movies is enough to say that the former film was, at the very least, a heavy influence on the latter.  There is a monster that has a disgusting lair underneath New York City.  There is a crazy bag lady (Rose Geffen) who runs afoul of the monster.  There is a featured character, Gail (Amy Brentano), who is a photographer.  There is a scene where Gail’s lights go out, and she has to go down to the basement to investigate (like C.H.U.D.’s Kim Griest but, astonishingly, without the shock shower scene).  Now, I wouldn’t declare that Breeders is only a ripoff of C.H.U.D. because it “borrows” from so many other films -  Humanoids from the Deep, Scanners, The Fly, and Lifeforce just to name four – to the point that it feels a bit like looking at old photos of that time you tried to do yourself up as The Wolf Man for Halloween, and you wound up looking like an idiot with a bunch of brown cotton balls glued to your face.

So.  Breeders.  The film concerns itself with the violent rape and mutilation of a bunch of virgin women by an oily, insectoid creature.  I’d get into more of the plot, but there isn’t one.

This film is a sleaze lover’s wet dream.  Every woman in it is a virgin (sometimes - okay, always -  unbelievably so; a coke-snorting, former-gymnast-turned-fashion-model is a virgin?  I suppose stranger things have happened), and that term is treated like a four-letter word.  The women are all attacked specifically because they are virgins.  The one character who isn’t a virgin is A) ugly, B) insane, and C) torn apart by the experience.  What does that say about the rest of the women?  Well, not much, since the filmmakers don’t really give a rat’s ass about any of them.  Gamble Pace (Teresa Farley) is a doctor, and she’s ostensibly the protagonist.  She’s also as weak-willed and ineffective as every other woman in the film (though Kincaid does give her a poignant scene at the very end that almost saves the film; Almost).  All the women feel a great desire to tell us why they are virgins, as if it were any of our affair.  Kathleen (LeeAnne Baker) states, “In this day and age, it’s almost some sort of dirty word to be a…virgin.”  She even has a hard time saying the word.  Alec (Adriane Lee), Gail’s stylist, explains to Gail about how she’s a virgin for no reason whatsoever other than to fly a giant red flag telling us that she’s the next victim.  All the women strip down at the most unlikely of times (while cooking dinner, while talking with their mother on the phone [okay, one is actually pretty likely], while on a break during a photoshoot, etcetera), and since there’s no reason for any of this, these scenes simply stand out as being the portions of the movie where Kincaid signals to the audience that this is what they are there for, and, hey, it’s been five minutes since you had a boner.  That the women ogled so heavily are virgins plays to men’s craving towards the Madonna/Whore Complex.  These women are willing to get naked for your eyes only, but they’re unsullied, and boy oh boy, unspoiled territory is the most irresistible, just so long as, you know, she’s also great in the sack.

The opposite side of this is, naturally, the Monstrous Male Sex Urge.  Going all the way back to, at least, 1931’s Dracula, the idea of being raped by (or at the absolute minimum, giving one’s body over to) an Other has been present in probably about half or more of every Horror film ever made.  The most famous example is the underwater ballet/sex scene from 1954’s The Creature from the Black Lagoon, and this is what begat Humanoids from the Deep once the walls had been broken down about displaying graphic monster-on-human sex on screen.  What’s kind of interesting in Breeders is that all of the attacks are initiated by normal guys who transform into (apparently) just the one monster.  He keeps popping up like the Great Gazoo.  The mere presence of a woman is enough to arouse sexual urges in men (even gay men are not immune) that cannot be overcome until their base desire is satiated (the film eggs this along by almost always having the women be naked in the men’s presence first).  Even when the men aren’t actual monsters, they’re lasciviousness is brazen and on full display.  Karinsa (the glorious Frances Raines, niece of legendary actor Claude) avers to the guy who barged in on her naked calisthenics, “It’s not like you were after my body” in an almost porno-coquettish come-on manner.  Kathleen asks creepy boyfriend Brett (Mark Legan) how much he saw of her taking a shower.  His unctuous response: “Enough that I know I want you to bear my children.”  But the monster is, as stated, The Other (read here as “non-white male”).  It wants to propagate its race, and it does so by stealing “our women.”  Further, it’s “semen” is described as a “thick, black substance.”  Have no fear, however, since all the beast’s victims later get to frolic together in a giant, gross, “semen”-filled (this time white in color, just to make all the men in the audience think of women frolicking in semen) hot tub, which I’m convinced was taken, unwashed, directly from Plato’s Retreat.  One can just imagine the bacteria in that thing.

This is not to say that Breeders doesn’t have a certain appeal.  After all, I’m a heterosexual male who enjoys seeing a naked woman (or several), and I have a love for special makeup effects going back to my pre-adolescence.  Both of these bins are filled to overflowing by Kincaid and company.  It’s just that the rest of the bins that a truly successful film needs to fill (compelling characters and a narrative, namely) are ignored almost entirely.  If nothing else, this film is an American-made Hentai, and it does that as well as it was going to be done in 1986.  It’s just disappointing that the non-exploitation elements are so clumsy and dull that it dragged down the whole experience for me.  I think I expected too much from a film titled Breeders.

MVT:  The nudity and special effects.  Well-done on both counts.

Make or Break:  The first attack scene is admittedly unexpected in how it plays out, and it raises some questions that the film quickly answers in the most ham-fisted way possible.