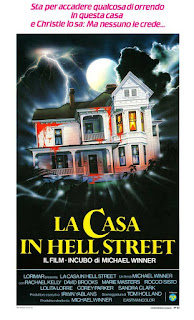 Christie Cromwell (Rachael Kelly) sits wistfully at a lake and peers off into the distance.  In voiceover, she states her name, age (seventeen), and that her dad is trying to murder her mom.  With that feminine-hygiene-product-esque intro out of the way, the rest of Michael Winner’s Scream for Help concerns itself with Christie’s efforts to prove this statement without dying.

For the first two thirds, the film is about Christie’s temerarious attempts to catch out stepdad Paul (David Allen Brooks).  She follows him for several days on her bicycle until she finds where he goes everyday from work.  And how did she come to suspect him in the first place?  She came downstairs in the middle of the night and saw him coming out of the basement.  The camera gazes down the cellar steps, and we hear water.  The next day, a utility worker is killed when he touches the wet electrical box in the basement.  Suspicious?  Maybe.  But Christie wants Paul to be a murderer, because her mother left her biological father (whom we never see nor learn anything about, not insignificantly, I believe) for him.  It is possible that everything Christie discovers or witnesses could be put down as confirmation bias, but the script (by Tom Holland) doesn’t even try to beguile us like that.  It’s blatantly obvious from the giddy-up that Paul has malfeasance on his mind.  I’ve never read a Nancy Drew story (or Hardy Boys, for that matter, but I have seen a lot of Scooby Doo and Clue Club), but the instant that Christie begins her investigation, that’s what I thought of.  I imagine that a Drew tale probably involves more mystery than Scream for Help does, though (and probably less violence, sex, and blood).

Of course, no one believes Christie.  Even her best friend Janey (Sandra Clark) thinks Christie’s gone off the deep end.  The police commissioner (Tony Sibbald) at first takes her accusations seriously, but after some mindbogglingly shitty police work comes to not only disbelieve the young lady but also to develop a sort of grudge against her.  Christie’s mother (Marie Masters) doesn’t take her daughter seriously, even though, from what I recall, her relationship with Paul is not that old.  Apparently, mom took up with Paul, ditched her husband, and married the other man in a matter of months.  Christie’s allegations are seen largely in this light by the other characters but not by the audience.  Christie watches (and we do, too) as Paul gets it on with Brenda (Lolita Lorre, whom I’d like to believe is related to Peter, but I couldn’t find anything confirming or denying this) multiple times, and his flimsy excuses would raise eyebrows in even the most devoted of marital partners.  It may have been interesting to see the story develop with a more enigmatic approach to what’s going on, but the filmmakers aren’t really interested in that.  Instead, they draw out this cat and mouse aspect just to get to the meat of what the film is actually about.  This is either a master stroke of deception or a happy accident.  But I’m getting ahead of myself.

And here’s where it becomes difficult to discuss Scream for Help any further without getting into SPOILERS.  More than anything, the film is about the initiation of Christie into adulthood and how both sex and violence are the means of that inauguration.  Beyond this, it’s about the choice between sex and violence that Christie has to make.  Christie lives in a world where absolutely everyone around her is having sex except her.  When she races over to her friend Janey’s house to tell Janey about her theory of Paul’s murderous intent, she waltzes in on Janey having sex with Josh (Corey Parker, whom most will recognize as the effete Arnold Epstein in Biloxi Blues).  Janey, probably pissed for being interrupted pre-orgasm, is openly hostile to Christie, who, in turn, is pissed at Janey for not telling her that she was having sex at all.  Christie comes home to the sounds of her mother and Paul having sex, and she runs to her room in anguish.  But Christie is, of course, curious about sex, and Paul’s affair with Brenda is the window (literally and figuratively) into this fascination.  At several points, she spies the two doing the job, and it’s always at a remove through a pane of glass (like watching a live Swedish sex show in a porn booth).  Paul asks if Christie is writing “the life and times of a sex maniac” in her journal.  Nope, it’s all about murder.  Intriguingly, Corey is the ostensible love interest, but he’s about as big a jerkoff as every other man in the film.  Christie catches Corey flirting with another girl at school (the day after she caught him with Janey?).  She tries to rope him into helping her out by threatening to tell his father about Janey, and Corey proudly states that his dad would congratulate him.  Rather, it’s the threat of cutting him off from Janey’s pussy that motivates the kid (and puts her own in his crosshairs).  After Janey is out of the picture, Corey and Christie hook up pretty fast.  Corey continues to pressure Christie, telling her he cares about her, but we know that he’s simply horny, and while we can’t necessarily blame him for this, it makes him no less of a douche.

When Christie and Corey finally have sex, it’s unpleasant for Christie, but then again, it’s her first time.  It’s painful, and the blood from popping her cherry scares her.  The ties between sex and violence in the film have been leading up to this moment, and here is where Christie chooses which of the two she prefers.  When Corey brings up the possibility of more sex, please, Christie tells him that she “doesn’t want to go to bed with anybody ever again.”  In the last third of the picture, when Paul and his accomplices hold Christie and her mom captive, things come to a head.  Faced with their imminent deaths, Christie, with ho-hum determination, states, “There’s only one way.  I’m gonna have to kill them.”  With MacGyver-ian resourcefulness and icy resolve, she sets about doing just that.  The film becomes Death Wish if Paul Kersey’s wife and daughter fought back (or maybe just Home Alone with corpses).  After the siege of her house, Corey and Christie get down to some foreplay, but violence rears up yet again, and Christie, without hesitation, goes into kill mode.  Sex is something she may still want to do despite her inexperienced protestations, but violence is something she likes.  This is what maturity means in the world of Scream for Help.  That the film is so frank about these facets is rather startling, considering its almost juvenile plot and dialogue, flat direction, and a score that is insanely incongruous (it sounds like it was taken from a Seventies industrial film about the future of plastics mixed with a buddy cop show of the same era).  Nevertheless, this forthrightness is what also makes the film so special.

MVT:  The remarkable depths to which the film dives and the unsparing attitude it takes in going there.

Make or Break:  The vehicular homicide that comes out of nowhere.  It’s fast, brutal, and contains a spectacular mannequin death.