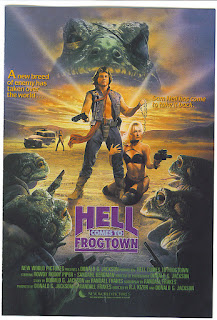 I suppose it’s either serendipity, ineluctability, or simply a writer’s laziness that I choose to touch on Frog Baseball for this week’s introduction.  For those who don’t know, the premise is simple.  You get a frog and a baseball bat or a stick of some kind.  Then you basically play baseball with the animal for the ball.  It’s an unconscionably cruel act, even if you’re not a fan of amphibians.  I have been present when it was played, way back when, although I honestly don’t recall whether or not I participated (I’d like to think I didn’t, because even back then, I felt it was senseless and mean).  Where the idea for this came from, I have no idea, but I do know that it gained some popularity in the Nineties with Mike Judge’s Beavis and Butthead (not that I believe that Judge was condoning it at all) in the way that easily influenced people do dumb things they see in movies and on television.  I find it thought-provoking that psychologists point to animal cruelty as an early sign of sociopathy and serial killer development, things like pulling the wings off insects or vivisecting the neighborhood dogs and cats.  And yet, Frog Baseball is never brought up, to my knowledge.  Possibly this is because it requires more than one person (I suppose you could play it by yourself, and that would likely count as aberrant behavior), so, like anything a mob of people gets up to, it’s generally frowned upon but not necessarily viewed as deviant in terms of what it says about the psychological makeup of people who do it (often misguided, sure, but not deviant).  In other words, it’s not seen as a warning sign (though it probably should be).  I have to wonder if the frogmen in Donald G Jackson and R J Kizer’s Hell Comes to Frogtown have ever thought about playing Human Baseball.  More likely than not, they have, though, let’s be honest, it’s not too easy to toss a human into the air and smack them with a bat (no matter how much they deserve it).

Ten years on from full-blown nuclear war, the human population is in decline.  Fertile men are valued for their virility and not much else.  Enter Sam Hell (Roddy Piper), an ex-soldier and legendary sperm donor.  Sam is pressed into service for Med-Tech, the provisional government’s procreation unit, and he is sent on a mission to rescue and impregnate a coterie of young, fertile women from the harem of Frogtown’s Commander Toty (read: Toadie, played by Brian Frank).

I’m kind of surprised it took me so long to get around to watching Hell Comes to Frogtown, because, on its surface, this film has everything a young me (and even an old me) would love.  It’s set in a post-apocalyptic wasteland.  It has plentiful creature makeup effects courtesy of the great Steve Wang.  It has beautiful women in it, including Sandahl Bergman and Cec Verrell (and I never thought I would review two films featuring Verrell in less than a year, incidentally).  It has Rowdy Roddy Piper, one of my favorite wrestlers from back in the day.  Nevertheless, I passed on it for a long time, possibly because the title just sounded silly (this from a guy who loves silly things).

But the film is deceptive in that it’s not a wall-to-wall Science Fiction/Action romp.  Yes, it has those elements, but at the end of the day, it’s actually about sex, and more than that, it’s about love and sex.  The world of the movie is one in which sex is functional, not something for enjoyment and certainly not something done with a person one cares about.  Spangle (Bergman) is all about the mission.  Her job is to get Sam to do his contractual duty, as it were.  She has been trained in the art of seduction, but this is in service to her job.  Stripping down and caressing her body is a means to an end, a functionality of her role in this people-centric arms race.  Hence, her movements are awkward, self-conscious.  It’s not until later that she comes into her own and discovers a little thing called passion.  Verrell’s Centinella is a soldier through and through.  She neither needs nor wants help from a man.  However, she is curious about the fabled Sam Hell, and gives in to this curiosity, if only briefly (and much to the viewer’s delight).

Likewise, Piper is decidedly un-Piper-ian.  Sure, he eventually gets to throw down with a couple of beefy bad guys, including a somewhat underserved William Smith, but overall, he plays it light.  Sam wants nothing to do with Med-Tech’s plans.  In fact, as the film opens, he’s being beaten up for sexual assault (this odd bit of business is never confirmed entirely by anyone as far as Sam’s intent goes, so our initial impression is that he is, quite possibly, a humongous scumbag), and this will be mirrored later in a morally ambiguous scene when the group comes upon a frantic woman fleeing from her Frogtown captors.  From the men I know, the opportunity to have sex with as many women as you want, guilt- and consequence-free, would be a dream job.  The most perplexing thing in the film is that Sam has no desire for this.  He would rather flee than get his smooth on.  At first blush, this flies in the face of everything anyone knows about the male animal, but as the film develops, it becomes clear that Sam is a man who is deeper than he appears.  He has sincere feelings for his friends and loved ones, and part of why he has gone cold in the libido department is due to what he lost in the war.  He remains true to himself, and the relationship he develops with his guardians strengthens them all in this regard.

Hell Comes to Frogtown is a movie that defies its generic expectations (in fact, I would argue it is least interesting when it plays to those expectations, although even when it does, it does so slyly).  It looks great on a tiny budget, with Jackson and Kizer providing a lot of thoughtful compositions.  The script, while sometimes a trifle too on-the-nose, is also astoundingly funny in spots, and the characters are compelling.  The action is well-orchestrated, though nothing to really write home about.  And how many movies are there where you can watch Roddy Piper with nothing covering his sweaty torso aside from a short jean jacket and sporting an honest-to-God loincloth (I swear, I thought he was trying out for The Lost Boys)?  That’s what I thought.

MVT:  Piper provides the heart and the vast majority of the laughs, and he even underplays a lot of it, proving the man was more than a one-trick pony.

Make or Break:  The sequence with the chainsaw.  It’s simultaneously hilarious and tense.