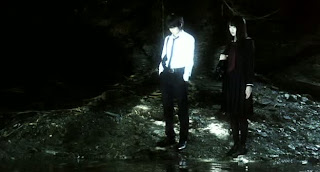 Those goth folk used to scare the piss out of me. I mean, how can you trust these people who gladly embrace the darkest corners of their soul and flaunt it for the world to see? These people were dangerous. At least that’s what my junior high-self thought. Then it all changed for me. I’m not sure if the shift from intimidating to buffoonery happened around the time of Hot Topic or when goth went pop-punk. Goth: Love of Death helped some of the feelings of unease to resurface. 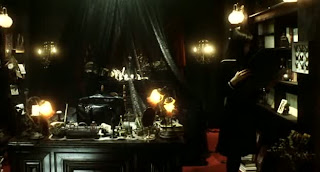 Gen Takahashi’s film introduces us to two unabashedly gothic stereotypes: black umbrella sporting Yoru and happy on the outside, gloom on the inside Itsuki. Itsuki comes off as your typical fun-loving teenager, but in his western-style home is a bookcase/secret compartment of all manners of literature relating to death and murder. Yoru is your prototypical ice-cold goth girl who has a comically clichéd goth lair in her traditional Japanese home. The similarities in their rooms coupled with their homes could be a comment on traditional and westernized lives carry the same capacity for gloom, but I’m sure it’s more nuanced than that so I’ll just leave that alone.
Initially, the film comes off as a really hard sell. The plot is appealing enough, as it shows Yoru and Itsuki trying to track down a serial killer. This may feel like a Choose Your Own Adventure kind of story, but these goth kids' priority is to just see the victims first and have no real ambitions of stopping the killer. 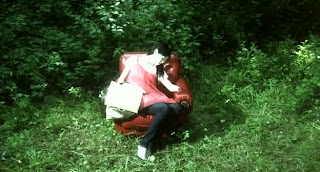 The film has a very meditative pace and aims to supplement that with ethereal lighting and steady camera movement. This is all well and good, but it has the delivery of a Mack truck into a gas station. There’s never a moment where the camera isn’t overexposed, creating an ethereal glow to the settings. The problem is that this overexposure is omnipresent and just feels too ham-fisted. This movie is to overexposed light as Michael Bay is to explosions. Where the film's style succeeds in spades is in the score. The film switches between a fantastic orchestral score that supplements the emotional aspect, while an awesome Goblin-esque score plays up the unsettling moments. 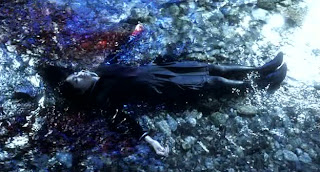 The acting can also swing from inspired intensity to broad gothic pout. To her credit, Rin Takanashi’s Yoru manages to be the most engaging through her subtle expressions and steely eyes. While she doesn’t mutter a word for the first 15 minutes, she does manage to communicate very well with the audience. On the other hand, Kanata Hongo’s Itsuki sometimes just comes off as stereotypically effeminate and unbearably pouty. 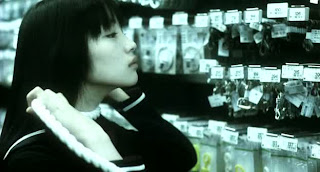 Even though the ham-fisted delivery turned me off from the movie for the first half, the emotional payoff in the climax really helps to justify the characterization. The closer the two teens come to finding the killer, the closer the audience comes to understand the motives and reasons behind why these two teenage characters are who they are. There’s a real sense of tragedy that underscores Yoru’s demeanor and a frightening ambivalence to Itsuki. The height of the climax brings up a number of questions to the emotional and psychological state of these two characters. Unfortunately, while the climax brings the film together as an enjoyable whole, the denouement betrays the show-don’t-tell mood of everything before it.
Aside from the long-winded conclusion and a completely unnecessary twist(just a small one), Goth: Love of Death manages to work in ways that I wasn’t prepared to anticipate. The film has a grisly sheen at first, but it turns out to be an emotionally substantive take on teen isolation, guilt, and identity.
MVT: Easily, the most valuable thing in this movie is Rin Takanashi. When the director's overblown style and broad acting of her male counterpart failed to engage, I found her portrayal to be the most fascinating and nuanced part of the film.
Make or Break: The climax is really what helped the movie realize what it is. The build-up is a tense encounter in a coffee house which leads to the payoff, which is just a quiet moment between two of the characters. The combination of tension and quiet relation is the perfect crystallization of what makes this film work.
7.75/10
Posted by Jake McLargeHuge at 3:14 PM