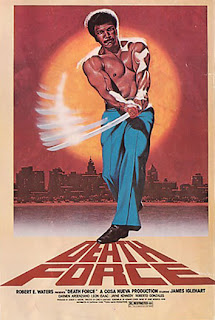 At various points in life, we’ve all had friends screw us over in some way. People who never returned borrowed copies of Excitebike (Wayne), others who pinched liberally from your stash (Steve), and varsity athletes who hooked up with your date the night of senior prom (fuck you, Tim). Despite transgressions like these, I’ve been fortunate that none of my friends tried to stab me to death and leave me in the middle of the ocean. Doug Russell, worthy protagonist in Cirio H. Santiago’s 1978 blaxploitation film Death Force (a.k.a. Fighting Mad) is not so lucky, however. 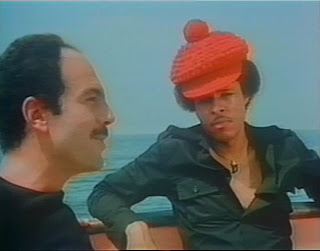 Three Vietnam War buddies are on their way back to the States after their combat service and have a large shipment of stolen gold to show for it. After selling off the loot to a shady buyer played by Santiago regular Vic Diaz, the three veterans are reveling in their new wealth aboard a boat to Manila. One partner, Morelli (Argenziano) has immediate designs on using the money to take over the Los Angeles underworld. He suggests to McGee (Penitentiary’s Leon Isaac Kennedy) that their partner, Russell, can’t be included in such plans since he’s a family man heading home to a wife and baby. But instead of giving Russell (Iglehart) his slice of the pie and letting him make a new life, they scheme to cut him out of the money right then and there. McGee distracts Russell as Morelli sneaks behind him and slices his throat and the two dump their former friend into the open sea.
Russell soon washes up on an island occupied by two Japanese soldiers marooned there since just after World War II. While the Japanese soldier has light comic streaks and is largely utilitarian -- catching and cooking fish, fetching drinking water -- the general is a samurai master prone to waxing nostalgic about Joe DiMaggio. They treat the burly American soldier’s wounds and are able to nurse him back to health. How he didn’t attract sharks or completely bleed out while drifting for hours in the ocean with multiple stab wounds is never touched upon, but Santiago could give a shit about our scientific logic. In time, the general trains Russell in the art of the samurai and transforms his clumsy sword swiping into slightly less-clumsy lethal force. His skill becomes so deadly, in fact, that he can slice coconuts clean in half as they are slowly lobbed to him. 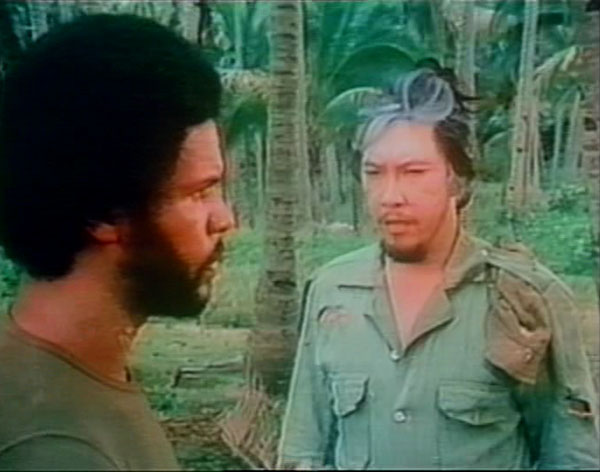 Meanwhile, McGee and Morelli have begun their violent takeover of the L.A. drug trade, including a particularly humorous scene where they show up to a poker room in pinstripe suits and brandish tommy guns like some 1920s rum-runners. McGee eventually begins putting the moves on Russell’s wife after telling her that he died in combat. Played by model and actress Jayne Kennedy, Maria is a sultry night lounge singer struggling to find new work. Despite her need for financial stability, she continually resists McGee’s sleazy attempts to exert his influence over her and replace Russell as her caretaker. What’s interesting about his increasingly menacing behavior towards her is that the two performers were a married couple of eight years at the time of the film’s release. We can’t be certain which real-life experiences Leon chose to mine from when working up rage for his scenes with her, but I’m sure they came from a “honey do” list. 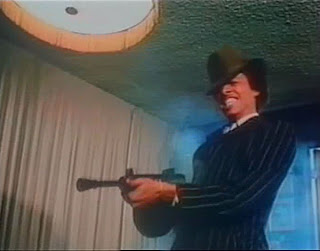 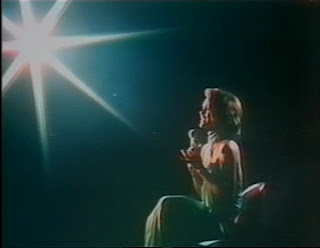 Shortly after the Japanese general declares Russell’s samurai training over and tells him to use his skills “for peace [and] not for the cause of vengeance,” Doug books it out of that shitty island and goes back to the States for bloody, head-choppy revenge. Most of the second and third acts consist of Russell tearing through his former friends’ crime organization, and while the choreography during these scenes isn’t extraordinary, the action has a raw and loose charm. The musclebound James Iglehart cuts a very imposing figure and moves pretty well for a guy of his size, but at times looks like a drunk hippo on ice skates. In a few instances that recall Peter O’Brian in The Stabilizer, our hero literally slips and trips over himself while trying to fight off the baddies. Thankfully, Santiago gives Iglehart and the stunt crew a number of sets to wreck, and they often spend as much time destroying props as they do fighting each other. 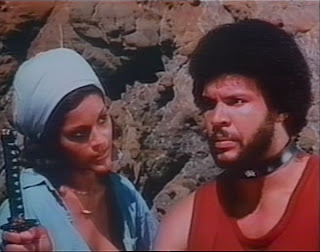 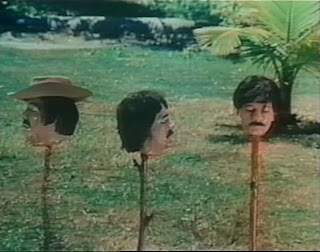 There are some awesomely cheesy death scenes in the run-up to the inevitable showdown between our hero and the dickheads who did him wrong. Morelli gets increasingly paranoid and unhinged as Russell works his way up the ranks, getting so flustered at one point that he can’t correctly put a phone back on the hook. While Kennedy portrays a pretty sleazy villain in McGee, I thought Argenziano was clearly the best performer in the film. Their gang may be a two-headed monster on paper, but he plays his character with a heavy anger that signals alpha dog status. Some actors make good creeps, others make good heroes, and judging by a sampling of his film roles, Argenziano’s character type is authority figures. It also doesn’t hurt that he sports a quality moustache and a pretty dense tuft of chest hair through most of the film. That stuff lets you know who’s in charge. 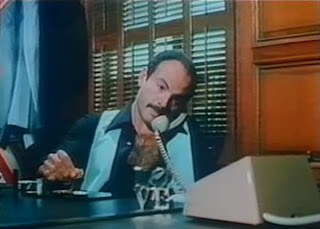 While the shot composition is fairly solid throughout, the biggest critique I can make of the film is that a number of night-time and interior shots are very poorly lit. This is only compounded by the rather poor quality of the edition I watched, as the film lacks a proper/official DVD release. Despite the obvious low budget nature of the film, Santiago still manages to create an engrossing blaxploitation revenge tale with good performances, good action, and reasonably compelling characters. A definite early gem from his catalog and one I would recommend without hesitation for exploitation fans.

Make or Break: Training scenes have the potential to really sink films, so the first beach scene between a recovered Russell and the Japanese general definitely made it for me. After the general describes the samurai code and his allegiance to his Emperor, Russell treats it all very lightly and makes wisecracks in response. Feeling disrespected, the general tosses the bigger and stronger Russell to the ground like a sack of potatoes to assert his authority. It sets the tone for the rest of the training scenes between master and pupil.

MVT: Carmen Argenziano as Morelli. As mentioned, Kennedy gives a really solid villain performance but I just thought Argenziano was operating at a different level. Morelli plants the seeds that set the story in motion and he projects authority in his interactions with cops, underlings, other criminals, and especially with McGee, his allegedly equal partner. While McGee does a lot of the sleazy asshole things that the audience requires to validate Russell’s revenge, you get the sense that Morelli is masterminding all of it. 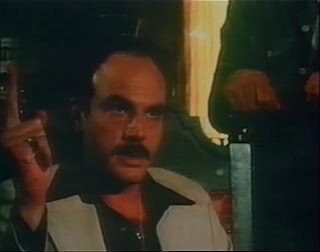 Score: 7.25/10Death Force is a solid 70s actioner that would please most fans of Filipino exploitation film and is a definite watch for anyone who digs the films of Cirio H. Santiago. While his filmography is short, James Iglehart also starred in Bamboo Gods and Iron Men and teamed up with Santiago previously for 1973’s Savage! It’s a bit of a shame he didn’t turn into a bigger star, but he’s in fine form here and definitely rates as one of the underrated heroes of 1970s action cinema.