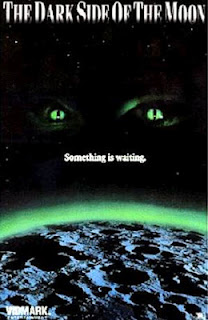 Space. Some kind of frontier. Nothing represents the concept of infinite possibilities to the human psyche like the infinite void of outer space (of course, whether it is actually infinite or not is the stuff of much debating and testing, and even if it were finite, the scope would be beyond what the human mind could conceive, so calling it "infinite" is as close as we can come to reconciling its vastness, anyway). And like all things unknown, it is a source of both mystery and fear. After all, it has been speculated that the mythical Cyclops was thought to actually exist based on the appearance of the skulls of dwarf elephants (their nasal cavity is quite large and centrally located on the head, suggesting an orbital socket). Until humans knew better, unseen monsters roamed the Earth. By extension, the unexplored reaches of the cosmos (along with the unplumbed depths of the Earth's oceans) can be just as frightening as a sudden noise outside your window at 3AM.

In the year 2022 (you know, the far-flung future), nuclear-armed satellites are maintained by "refabs," glorified wrench monkeys…IN SPACE! On a routine mission, the crew of the Spacecore 1 is having problems chasing down their intended objective. Mysteriously, the electronics on their ship malfunction (though they all check a-ok), and the team find themselves running out of oxygen on auxiliary power. All seems hopeless until the Space Shuttle Discovery drifts out from The Dark Side Of The Moon, promising salvation but threatening damnation.

Cosmic Horror is one of those subgenres that I love just from the concept. I believe the reason is because when we think of outer space, we think of aliens, and when we think of aliens, we think of Science Fiction (and more often than not, our minds go immediately to the Space Opera, thanks to such properties as Star Wars and Star Trek). The difference between the subgenres is a visceral one. Where Space Opera is the province of lasers and light sabers, Cosmic Horror is the province of monsters and sharp, nasty, pointy bits. Space Opera wounds are clean, cauterized by the clinical technology that creates futuristic weaponry. Cosmic Horror wounds are gory, entrails spilling from traumas caused by primal forces. Space Opera's violence is distanced by its mechanical apparatuses (usually, though it can be just as affecting on an emotional level). Cosmic Horror is up close and personal, uncomplicated by machinery. It's guns versus knives, and while no one wants to be injured by either, everyone can relate to the pain of being cut, while being shot is more rarified (though becoming less so by the day, sadly). Plus, Space Operas may not necessarily showcase exotic beings (read: monsters), but Cosmic Horrors almost exclusively do. And monsters are cool.

Piggybacking off this idea, director D.J. Webster taps into one of the great villains of exploitation cinema in general (and certainly the most iconic): The Devil. Again, this ties into the juxtaposition of the visceral and the technological. Satan is the world's oldest villain (ostensibly), and to have him terrorizing the crew of a space vessel feels not only ironic but fitting. After all, the more advanced we become, the more we convince ourselves into thinking that the stuff of legends is simply that: legend. Monsters can't exist, because we know that monsters don't exist, because we have civilized the world (mostly), and monsters cannot exist in a civilized world, right? To be confronted with the exception to the rule is to confront the unknown and, therefore, terror. The supernatural nature of demons and the like is antithetical to the sanitized nature of our conception of the future. While the opposite (the influence of higher technology on less civilized peoples' evolution and the notion that "any sufficiently advanced technology is indistinguishable from magic"), has been depicted just as satisfactorily (witness Stargate or the Kane series of novels by the late Karl Edward Wagner), typically it is the monstrous which appears and brings the arrogant humans down a peg (typically by eviscerating them). Circuit boards and relays, after all, cannot stop the Prince of Darkness.

The filmmakers have done their homework with their subject matter, because they were smart enough to develop a visual motif and use it throughout the film, not only as a symbol but also as a literal plot point. I am speaking here about the triangle (and specifically the equilateral triangle). For centuries, it has been a symbol of power (just look at the pyramids of Egypt, though technically they have more than three sides). It has also been a symbol of fire, and of course when we think of Satan we think of lakes of fire, burning pits of sulfur, and so on. The victims in the film have triangles carved into their abdomens, and this serves not only as a means of murder but also as a portal of sorts for the Devil to hide. Even more significantly, the triangle has been used as a representation of God and the Christian Holy Trinity (Father, Son, and Holy Spirit), and let's not forget the trio of sixes that makeup Lucifer's number (and which can conveniently be placed one each at a triangle's three corners or sides). That the most flagitious entity in the universe uses it to his perverse ends is a bastardization of its holier meaning and the equivalent of Old Scratch giving his creator the finger. On the literal side, the triangle is used to explain just how what is happening is happening from a more rational standpoint, but only just. And as our mulleted hero, Giles (Will Bledsoe), begins to piece together what's going on with the aid of Lesli (Camilla More), the sexiest leatherclad supercomputer ever (yes, really), the results and the leaps of logic used to attain them come off as interesting on a geek level and groan-worthy on a commonsensical level.

Personally, I love the idea of the ghost ship in Horror films. From the Demeter which brought Dracula to the shores of England to the Event Horizon (of the titular movie incidentally made seven years after this one), the ghost ship is a carrier of evil in any of its forms. What's brilliant about the concept is that it creates a fear of empty space. There is simply nothing to see, only (usually) bare rooms. But we know it's only a question of time before the malevolence manifests, and that's what generates the anxiety. It helps that ghost ships in history, like the Marie Celeste, have never been provided with concrete answers (that I'm aware of) to the questions they raise. They have only induced more questions and conundrums. And even though this film does provide mostly cogent answers with little in the way of innovation or deviation, it manages to do so innocuously enough and pleasantly enough that it doesn't feel like time wasted simply scrambling in the dark.

MVT: Knowing that the basic idea behind the movie could easily be risible, the filmmakers cultivate a serious tone that accentuates the claustrophobia and mild paranoia which run through the piece.

Make Or Break: The Make is the scene where the Discovery is first spotted moving towards our heroes. It is staged and edited to produce sufficient impact necessary for the scene, and the low budget visual effects are competent enough to pull off the illusion and maintain the film's reality (and it should be mentioned, they are fairly convincing overall).