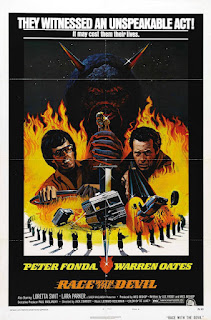 I once wrote the single worst short story about a satanic cult ever. I know that (since you read and enjoy my weekly reviews) you can't possibly believe this, but it's true. This was back when I was still very young. It was called "Cultism: Closer Than You Think," and I even decorated the front cover with one of the worst renderings of a satanic cult member ever. Actually, he looked more like a member of the Klan, in retrospect, but that's neither here nor there. The story (in as much as it can be claimed it had one) involved me (did I mention this was written in First Person perspective?) stumbling upon a coven of Satanists in the midst of a blood sacrifice. After a short chase, I wound up spending the night up a tree (much like the plot), and the next morning, the cultists were gone. The end. I swear to you, loyal readers (all five of you), I have never seen this week's film before watching it for this review.

Roger, Frank, Alice, and Kelly (Peter Fonda, Warren Oates, Loretta Swit, and Lara Parker, respectively, and not to be confused with Bob and Carol and Ted and Alice), head out on an early-year vacation in Frank's brand-spanking-new, fully-loaded camper. After some dirt biking and grabassery, Roger and Frank get mildly toasted for the evening. Across the shallow river, fire erupts, and thinly-robed people begin to prance around. Taking a closer peek, the two horndogs think it's just some filthy hippies having a harmless orgy. But when the coven leader (in a very nice mask, by the way) unsheathes the sacrificial dagger and plunges it into an all-too-willing female member, the men suddenly realize they're in some deep crap (sound familiar?). Alice's big mouth (she was "Hot Lips" Houlihan, after all) alerts the cultists to the vacationers presence, and our hapless quartet find themselves, not really in a Race With The Devil, but definitely in a race away from his worshippers. 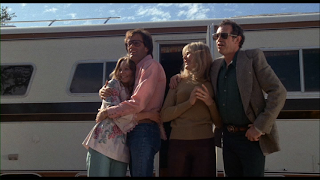 The basic story premise for Jack Starrett's film goes all the way back to the pulp magazines of the early twentieth century. Stories about strange cults, the people (usually dames) who espy them doing their dirty business, and the two-fisted shamuses that busted them up (the cults, not the dames…well…) abounded. The Seventh Victim (produced by the legendary Val Lewton and directed by Mark Robson) also dealt with the subject of Satanism in a very personal, very disturbing manner. That it did so in 1943 is, to me, both intriguing and somehow more affecting. Of course, while the viewers of an illicit act are usually decent, normal citizens, the viewees almost always are not, and they are also not exclusively creepy religious zealots. Just look at Hitchcock's Rear Window, Stephen Hopkins's Judgment Night, or Malmuth's Hard To Kill. The act viewed doesn't even need to be criminal in nature, and Park Chan-wook's Oldboy bears this out. Suffice it to say, the basics are a well-trodden path, and like all types, it's what you do with them that counts. Starrett, a very workmanlike but solid director of exploitation fare (as well as being an actor), doesn't go the way one would necessarily expect with the film, and crafts a mostly successful effort. But there are a few bumps in the road, to be sure. 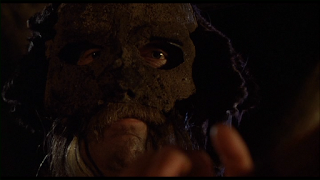 The film is centered on (in fact, is predicated on) the notion of The Gaze, what's seen or not and by whom (audience included). Frank and Roger witness something they weren't supposed to witness, and the chase is on. As the couples are haunted and harried by the cult, we rarely see any overt actions against them onscreen. In essence, this amplifies the tension and suspense, because like a poltergeist or a monster in the closet, we don't know when something is going to pop up to threaten the protagonists. It's not until the third act that the cultists act in a more public fashion to reach their ends. This is also the weakest point in the film from a Horror point of view (even though half the reason for making and watching the movie is to see cars smash into things as well as each other).

But it's a different facet of how The Gaze can be utilized where I think Starrett and company played their hand very well. Using the Kuleshov Effect (consciously or unconsciously, but I suspect the former, even if they didn't know what it was called), they give us montages of different people everywhere our heroes go juxtaposed against the reactions of the principals (particularly of Kelly), with the reaction shots informing our interpretation of the incessant menace the four find themselves poised against. The shots of the people outside the camper seldom convey any open emotion or intent. That the protagonists feel threatened by nothing (or at least by what a rational person not being hounded by Satanists would consider nothing) plays into the building of tension and adds to the film's edginess. I found it rather odd, then, that no one in the camper ever objected to allowing strangers at gas stations to work on the camper or insisted on double-checking their work afterwards. Perhaps that's part of the plan to get the viewer to shout at the screen and work up some adrenaline. If so, then mission accomplished. 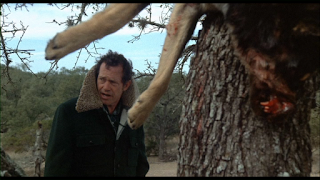 As a Chase film, the film falters a hair. By this point in time, Fonda had done Dirty Mary Crazy Larry as well as Easy Rider and was no stranger to the Road/Chase movie subgenre. Oates, though not as indelibly identified with this type of film, had done what many consider to be one of the best exemplars of it a few years earlier with Two-Lane Blacktop. Plus, he was already very much an icon of badass cinema from his work with Sam Peckinpah in The Wild Bunch and Bring Me The Head Of Alfredo Garcia. One would think that just having these two occupying a vehicle while being pursued by hostile forces would be enough, and maybe had they handled the material differently, it would have. However, in the struggle to serve two masters (both Horror and Chase subgenres), the filmmakers shortchange the latter. Rather than have our heroes constantly on the move, pedal to the metal, hellbent for leather, Starrett instead has the chase paced more leisurely. Consequently, the terror and paranoia angle and the escape angle are at odds throughout the runtime. They never occupy the same space or really tie themselves together completely. The car stunts, when they do come, are handled very well and shot effectively, but there seemed to me to be a bit too much downtime (and a mild air of non-concern from the protagonists) that deflates some of the uneasiness. It's not enough to ruin the film, and there is certainly enough here to satisfy almost anyone. However, as the film crosses the finish line, Race With The Devil feels more like a sprint than a marathon.

MVT: How in the world can I not have Warren Oates as the MVT? The man could say more with that cynical smirk of his or his withering glare than any ten actors could say with three pages of dialogue apiece.

Make Or Break: Everyone who watches this film is watching it to see the Satanic ritual scene (and, by extension, the action springing from it), and I admit I am one of them. Not as garish as it could have been, it sets a realistic tone that the film embraces right up until the closing frames.