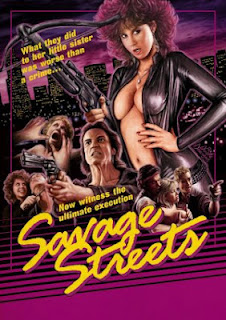 When the name Linda Blair is mentioned, the first thing people think of is The Exorcist (Admit it. You do). It doesn't matter if they are fans of horror movies or of bodice-ripping melodramas. It doesn't matter if they've seen a photo of the woman out of the Regan MacNeil possession makeup or in the past almost-forty years. It doesn't matter whether they've even seen the movie or not. The film and its imagery are embedded in our cultural psyche like a wood tick. Unfortunately, this means that Ms. Blair's career has also been overshadowed by the success of her early role. So, achievements like the Linda Blair WorldHeart Foundation, which rescues abused animals, don't spring to mind immediately (and, no, I have no affiliation with the organization, though I believe they're doing good work). I would wager that, if she had made more movies like Daniel Steinmann's Savage Streets (aka Zombie Brigade [?!]) or Roller Boogie and had skipped William Friedkin's horror classic, she would be remembered in a far different light. Whether that's good or bad (or indifferent) depends entirely on what you like to watch.

Brenda (Blair) struts the…um…wild streets of Los Angeles with her gang of female hellraisers (The Satins) and her über-innocent sister, Heather (Linnea Quigley). Meanwhile, Jake (Robert Dryer) and his gang of toughs (The Scars) cruise the same…er…untamed streets in Fargo's (Sal Landi) vintage convertible. After taking said car for a joyride, the boys have it in for the girls in a bad way. The bad boys (who are also drug dealers, just so you know) escalate things to the point of no return, and Brenda arms herself with a crossbow and various implements, taking her vengeance out onto the…uh…vicious streets. 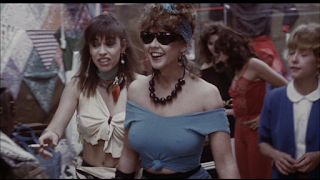 Just about every conventionally narrative film needs to have a protagonist and an antagonist in order to work. When they're well-made, the characters on either side of this equation have some depth to them (not that they are as real as you or I, but they are more rounded than a cardboard cutout). Sometimes, filmmakers use shorthand signifiers to show us whether the characters are good or bad and to what extent. Jake has a razor blade earring, is not classically attractive, and laughs (with his whole mouth) a lot at everything (and especially if they're things we know people shouldn't laugh at). He is evil. Heather is wide-eyed, blond, and cute as a button, and she dresses in long, almost Cleaver-esque skirts. Plus, she likes to dance by herself and is deaf. She is good (too good, in fact). Vince (Johnny Venocur) changes from "normal" teenaged clothing into his gang clothes and smiles uncomfortably at all of Jake and the gang's antics. He is right in the middle, but he thinks he wants to be bad. So, what's wrong with these things, that they ring hollow? Nothing, in and of themselves, but their depictions on screen are so bluntly on the nose and in your face, you can't help but feel just a twinge of resentment while still enjoying it.

The film carries heavy family undercurrents but not strictly in a traditional sense. Even though she's a hardass from the very beginning of the film, Brenda is intensely protective and mothering to Heather. We find out later on that their mother is struggling to keep their family together, working multiple jobs. She even has to leave a situation we wouldn't expect a mother to ever leave, because she has to work. But Brenda doesn't really blame her mother for leaving the girls to essentially raise themselves. She recognizes that her mother is doing everything she can to support her family. Nonetheless, Brenda doesn't go to her mother for any sort of comfort, either. Instead, she turns to Charlene (Paula Shaw), who apparently owns the club The Satins frequent. Added to that is the gang's support of their leader, forming an ad hoc, gynocentric family unit, but this one actually works somewhat. Naturally, there are men allowed but only on the outskirts and in an ancillary fashion. The Satins all wear the same style jacket, linking them together visually as well as in a sisterly fashion. On the other side of that coin, Vince goes from a (assumed) more stable home life to the ultra-macho Scars. We never find out if Vince is accepted within his natural family, but he wants more than anything for Jake and his crew to recognize his worth. These starkly drawn gender lines mark the film's conflict primarily as male versus female. 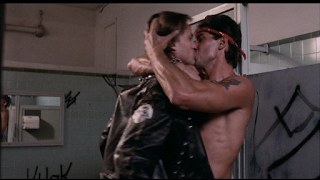 Speaking of gender issues, there is a profoundly homoerotic vibe in almost every scene involving The Scars. While the women regularly get naked and shower in front of each other (at least it sure feels that way), there are no sexual undertones (except, of course, for the obvious ones aimed at the viewer) between them. In fact, when the women are unclothed together, a catfight usually breaks out, and if they aren't unclothed when a catfight lets loose, one of them most assuredly is by the time it finishes. The men, on the other hand, are focused on sex constantly (consensual or non) and in relation to each other. Jake kisses Fargo full on the mouth after threatening him. Red (Scott Mayer) moans that he wants to watch Jake going after someone ("do it," I believe is the expression he uses), and that there's nothing wrong with him wanting to watch, right? They also constantly have their hands on each other in a non-platonic sort of way. And let's not even get into the outfits these guys wear (with Fargo being the most Village-People-ian). So, not only are The Scars the ultra-violent villains of the piece, they're also semi-closeted homosexuals. 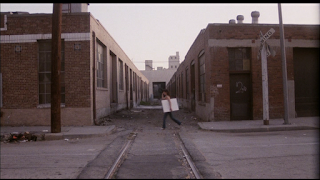 At its heart, though, Savage Streets is a revenge flick, so everything should be geared up to propel us forcefully into the harrowing third and final act. What we get outside of the main action are subplots which barely tie into the main plot at all. The most glaring is the one involving cheerleader Cindy (Rebecca Perle) and her feud with Brenda over Cindy's beau Wes (Brian Frishman, credited as Brian Mann), who Brenda doesn't care for in the least. Aside from one plot point, this subplot develops nothing, goes on entirely too long (if all it is intended as is a catalyst for bad things to happen), and barely resolves itself. However, it does give the ever-haggard Principal Underwood (the late, great John Vernon) the opportunity to ogle Brenda and pass appallingly creepy comments about her looks. Of course, all this melodrama gives absolutely everyone involved in this movie the chance to overact and grimace (and earn the entire cast the golden BEM Award). Nevertheless, we do eventually get to the big showdown (replete with heroic montage and hot licks), but with the exception of the final few minutes, the whole event feels matter-of-fact. And the one area a revenge film cannot fail is in the revenge portion. So, does this one ultimately satisfy? It's certainly sleazy, and there's enough pulchritude on display to mollify some. But to fumble on the goal line like this film does after all the anticipation turns what could have been a classic of the subgenre into a banausic proceeding.

MVT: The level of scenery chewing from start to finish leads me to believe that the entire cast and crew ripped out the dictionary page containing the word "subtle" and used it to snort mountains of blow.

Make Or Break: The revenge scene only gets it about half right. Ergo, I feel compelled to call it a half-Make and half-Break, simultaneously. The entirety of this sequence should have been a succession of "punch the air" moments. Instead, you kind of feel like punching yourself in the face.