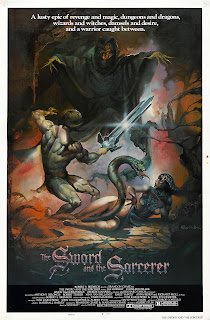 Texas-born actor Lee Horsley is one of those guys who look better with a mustache than without one. If you seek proof, just watch Albert Pyun's The Sword And The Sorcerer. Sure, he has some stubble, but his lack of a manly upper lip covering makes him look like a baby face. Contrast this with the television show for which he is best known (or at least the one for which he is best known to me), "Matt Houston." Not only was he a two-fisted private dick, but his constant companion was none other than Pamela Hensley. For those who don't know, Ms. Hensley also played the deadly ice queen, Princess Ardala, on the program "Buck Rogers In The 25th Century." Not only was she a ruthless opportunist, but she held her own alongside such hardasses as Henry Silva and proto-Edward-James-Olmos, Michael Ansara. And she did it all while looking phenomenal in a bikini (yes, really). I put it to you, gentle reader, would you rather hang out with Pamela Hensley or Joe Regalbuto? That's what I thought.

Villainous warlord, Titus Cromwell (we know he's villainous, because he's played by Richard Lynch with a Harpo Marx hairdo), resurrects demonic sorcerer, Xusia (Richard Moll), to aid him in conquering the kingdom of Ehdan, ruled by the benevolent King Richard (Christopher Cary). However, Cromwell betrays Xusia and raids the kingdom solo. As Ehdan falls, Richard's son, Talon (James Jarnigan as a boy, Horsley as an adult), is bestowed with a three-bladed sword, witnesses the death of his family, and vows revenge. Years later, Prince Mikah (Simon MacCorkindale, TV's "Manimal") and Princess Alana (Kathleen Beller) foment rebellion in Ehdan, but the machinations of Cromwell and his right hand man, Machelli (George Maharis), threaten to quell the revolution unless the adult Talon and his band of buccaneers (including the one and only Reb Brown) intervene and smash the tyrant. 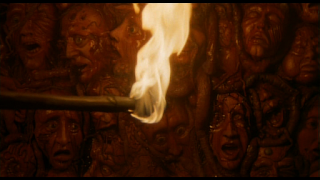 One of the great tropes that the sword and sorcery/fantasy subgenre gave us (or if not gave, certainly cemented and made its own) is the concept of the specialty weapon. Prince Colwyn of Krull had the über ninja star, the Glaive. Hawk of Hawk The Slayer had a mental link of sorts with his sword. Dar of The Beastmaster had the collapsible (or spreadable depending on your perspective) throwing blade. In times when gun powder simply doesn't exist, survival of the fittest is won by the person with the most unique weaponry (because the other guys don't have it). More often than not, the hero has to spend part of his quest attaining this weapon before he can use it in the story's climax (and he really should use it in the story's finale for it to be satisfying). As I mentioned in my review of the abysmal Thor The Conqueror, oftentimes these special arms are born of magic. Their wielders, however, are not typically trusting of magic and prefer to use their hands or hand-forged steel, hence why they are rarely, if ever given a magical amulet or scroll or some such with which to combat evil. Yes, the weapons are magical, but they are represented as weapons. They have blades and spikes and harmful-looking accoutrements. Thus we come to Talon's triple-bladed sword. This thing has more gadgets and surprises on it than a Swiss Army knife or James Bond's Aston Martin. And yet, the thing appears to be the most unwieldy blade ever. The air drag alone would make you the slowest (and probably most dead) swordfighter in history. Nevertheless, it's endearing to us and we forgive (to a degree) its ludicrousness (nothing says antipragmatic like sword missiles), because it has become a necessary element of the genre, and it definitely has a distinct look to it. 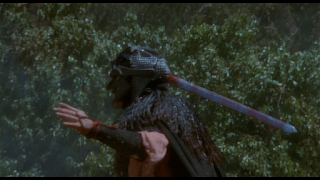 The Sword And The Sorcerer also deals with the concept of birth and rebirth. Interestingly, it applies it both literally and figuratively and to both good characters and evil. Xusia is brought back to life, rising seemingly out of a sepulcher filled with blood. Meanwhile, Talon, as a heroic figure is born at the time he witnesses his parents' deaths. Later, some very biblical event occurs to him, which again echoes this theme. On a more grand scale, Cromwell is born as a despot as he conquers (read: kills) the kingdom's in his path. Mikah and Alana endeavor to resurrect Ehdan and restore it to its former glory through their insurgency (which is more than confusing, since Talon is the son of the former ruler according to the prologue and unrelated to either of these two). Cromwell thinks Xusia dead but later suspects that the damnable wizard is behind all of his current woes, and in a fashion, Xusia has, indeed, been reborn yet again. This constant cycle of birth, death, and rebirth parallels the eternal struggle between good and evil or even Rota Fortunae (i.e. The Wheel Of Fortune), symbolizing the recurrent nature of Fate. The Sword And Sorcery subgenre, like Science Fiction and Horror, is well-suited to this sort of motif. They are already, through their generic elements, divorced from reality. This allows for more deeply allegorical explorations and heavy usage of metaphors via these selfsame elements. How interesting it is that the more divorced from our everyday world the piece is, the more easily it allows us to discuss the issues of our everyday world.

It is a generally accepted rule of storytelling in general and screenwriting in particular that a tale cannot be rife with coincidences. One is acceptable, but adding more, you run the risk of making the whole yarn feel arbitrary. After all, why should the hero have to accomplish anything when some coincidence, Deus Ex Machine, what-have-you will most likely just pop up and solve his/her problems? And why, then, should you give a shit? Sadly, there are a lot of coincidences in Pyun's film, and they do detract from its quality. Characters just show up out of nowhere to lend a helping hand. Other characters suddenly have a conspicuous change of heart, when we've never been introduced to them at all. It's not enough to condemn the film overall, but it is enough to take points away from its score. 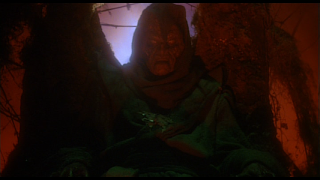 The scope of Pyun's film is rather epic. He is, after all, trying to create an entire fantasy world. Be that as it may, this is epic fantasy on a budget, and its effect on the overall enjoyment of the film is noticeable. For example, in the prologue, Cromwell has at least two large battles between his army and his opponents. We don't get to see any of the fighting. We don't get to see any of what Xusia (who we spent a nice chunk of screen time resuscitating, mind you) does in service to Cromwell. No, we get shots of the corpse-strewn battlefields, post-battle (and I would wager shot at the same time). In a cave, Talon and his men are attacked by a horde of rats. Granted, they are repugnant animals, and I would not want them crawling all over me and gnawing bits off, but this is a fantasy movie. They couldn't be attacked by some otherworldly creature? After Talon's men band together to spring their leader, we cut immediately to the same guys locked up in the dungeon. Yes, it's funny, but the elision of the action leading to their capture feels jarring. You feel like you missed scenes at several points (and some of which appear to be key) in the film. What intrigued me about this was that there were some action scenes that were nicely done, so we know that the filmmakers could pull it off. Nonetheless, knowing this and enjoying what there is to the movie in its current form, you can't help but crave to fill in these blanks. But isn't that part of what Fantasy is all about?

MVT: The special and makeup effects used on characters like Xusia are wonderful and half the fun of the picture. There are some surprisingly gory shots that really deliver, and the best part is, they always seem to come just at the moment you need them the most. Crafty devils.

Make Or Break: The Make is the credit sequence, when Xusia is raised. It's violent, queasily sexy, funny, and oh-so arch. When the sorcerer's "E.T." fingers start glowing, you know someone's going to die violently. And do they ever.