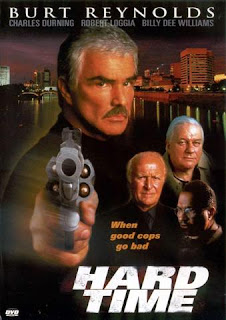 Once I found out there was a film starring Burt Reynolds, Charles Durning, Robert Loggia, Billy Dee Williams and “Rowdy” Roddy Piper, I knew I had to see it. I immediately started drooling when I heard the cast from a fellow gentlemen. When he told me it was streaming on Netflix, I hopped straight over and hurled the film to the top of my “to review for the GBtMC” list.

I almost backed out in trepidation, as I seen it was a made-for-TV movie (it aired on TNT). There’s a certain stigma surrounding made-for-TV films. One that plagues direct to DVD productions. One automatically thinks it’s of a lower quality. Why else wouldn’t it hit the big screen? Especially with such a cast behind it.

Fear not, gentlemen (and gentlewomen)! Despite being a made-for-TV production, “Hard Time” is an entertaining watch. And not in the “train wreck” sense. If anything, I believe it was aired on TNT in the hopes that it may start a new series (there are quite a few television pilots that are feature length). I could be completely wrong and just hoping that was the case, as I would have loved to see Logan McQueen (Burt Reynolds) some more!

The film (directed by and starring Burt Reynolds) is nothing new. Reynolds plays Logan McQueen, a detective who is classified as a loose cannon. Along with his partner and longtime friend, Charlie Duffy (Charles Durning), he bends the rules in order to get the job done. This has gotten him six spankings from the county, as Captain Adam Gunther (Buck Taylor) states. It’s also reduced him to graffiti duty, though Duffy makes us believe he hooked them up with the gig so they can relax.

When a chase and shootout occurs between Logan and Catarato Estevez (Paco Christian Prieto), McQueen is framed for killing the crook’s partner. He’s also believed to have stolen some money from the briefcase, which belonged to kingpin Connie Martin (Robert Loggia). Logan has to prove his innocence or face jail time (which he already spent some, making friends with a transvestite).

The plot itself is never so much convoluted as it is streamlined. There are twists and turns, but they’re not too hard to predict. It’s never overtly confusing, which makes sense considering it was playing to a broad audience on cable who were looking for a detective flick, but one that wouldn’t rack the brain. This is more along the lines of “Law & Order” with some gunplay thrown in. For that, it works well.

The shootouts in both the beginning and end are sufficient (though the opening is dragged out a bit). The hand to hand combat is a bit more juicy. There’s a brief, but satisfying fight sequence between Reynolds and Piper that quenched my thirst. Going into the film, I was hoping they’d duke it out. I wasn’t disappointed. I may have wanted more from the “Hot Rod”, but I understood his limited screen time. His sole task was to be one of Loggia’s henchmen and he fit the bill nicely.

The acting itself is above par for what one expects in a made-for-TV film. That shouldn’t be too much of a surprise, given the task. Reynolds and company do ham it up and shout loudly a lot (in this environment, you have to be macho), but there are moments where sentimentality comes through. One scene in particular has Logan talking to Leo Barker (Billy Dee Williams) and showing remorse for his actions. It’s in this scene that we discover his true passion for the business and that he’s nothing without his badge.

What holds the film together is the relationship between Logan and Duffy. Reynolds and Durning have terrific chemistry together! They’re given a back story on how Duffy rescued Logan at the age of sixteen, as he was bouncing from foster home to foster home at that point. You feel that bond from the start and, when they’re tasked with an emotional twist, I actually cared about them and felt sorrow. Durning also provides quite a few laughs, as he plays his role as a detective who’s a child at heart (the first time we see him he’s playing hopscotch).

“Hard Time” does have it’s fair share of flaws. Logan has a love interest with his lawyer (who is so unmemorable I kept thinking she was a new character every time she appeared) that goes nowhere and the lawyer trying to put him behind bars is too weasely and has no bite (and is also forgettable). Reynolds doesn’t utilize these characters well, using them solely as pawns on a chess board. He also doesn’t take the audience for much intelligence wise, as he’s constantly flashing back to previous scenes from the film. Even with commercial breaks, I have a feeling the audience wouldn’t have forgotten what’s occurred. The biggest detriment is the last half. It’s not that the twists and turns don’t work. It’s that the film simply runs out of steam. Maybe that’s why I felt this was a pilot for a television show. It would have been better suited at an hour instead of ninety minutes.

Nonetheless, “Hard Time” is an enjoyable film. It’s a light detective fable with a splendid cast that pleases the sweet tooth. It’s not necessarily high quality or a game changer, but it’s a decent production. Which, for a TV movie, is akin to calling it “Citizen Kane”. At the very least, you’ll probably have more “fun” with this than the Orson Welles classic.

MVT: The relationship between Logan and Duffy. Reynolds and Durning work off of each other well and are amusing to watch. The fact that I want to see a television series with these two in the lead is telling of how much I liked them.

Make or Break: The scene where Logan pours his heart out, so to speak, to Leo Barker. That proved that Reynold’s wasn’t simply going for a cheap buck. He put some heart into the film and characters and I appreciated that. From here on out, that shined through.