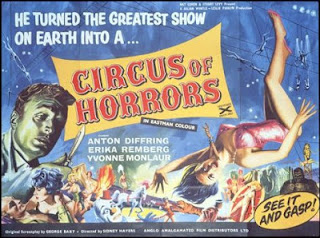 Dateline: England, 1947.  The police race to the home of Evelyn Morley (Colette Wilde), where the young-ish lady is in the process of smashing her boudoir to pieces dressed only in her skivvies.  You see, that rogue German plastic surgeon Dr. Rossiter (Anton Diffring) performed some illegal (?) work on the Ms. Morley, and now her face is a picture of grotesquery.  Fleeing down a winding road, Rossiter’s car explodes into flame as it careens down a mountainside.  Escaping by the skin of his teeth, Rossiter and his cronies, siblings Martin (Kenneth Griffith) and Angela (Jane Hylton), make their way to France.  There, Rossiter unveils his new face (pretty similar to the old one but no beard) and identity as Dr. Schüler, and he discovers that the scars of the recent war run deep.  The bad doc inveigles his way into ownership of Vanet’s (Donald Pleasence) circus by fixing the owner’s daughter Nicole’s (Carla Challoner as a youth, Yvonne Monlaur as a more mature youth) face.  The Circus Of Horrors rolls out.

I cannot fathom getting plastic surgery, nor can I understand the compulsion people feel to do so voluntarily.  Certainly, the procedures have come a long way, and there are a great many folks who have benefited tremendously from the skilled hands of its practitioners, people who were maimed or deformed either by accident, intent, or caprice of nature.  But for those who feel that plastic surgery is some kind of fountain of youth, it is impossible to believe that they ever thought that it would do anything other than make them look even more risible and flat-out repellent than the ravages of time ever could.  They wind up resembling either crying-on-the-inside-style clowns or the sort of physical types Tod Browning would have given his eyeteeth to use in Freaks.  But one has to wonder; Have these people never seen someone who has had this kind of thing done?  Do they not realize that the odds on this operation having a positive outcome are slim to nil?  I can only assume that photos of plastic surgery disasters (apologies to Jello Biafra and Dead Kennedys) are banned in states like California.  Either that, or only blind people go in for plastic surgery.  The world may never know.

Sidney Hayer’s film (aka Le Cirque Des Horreurs aka Phantom Of The Circus) cannot really be classified as a Horror film, though it contains and is built on some horrific actions.  It was released the same year as both Psycho and Peeping Tom, and like those superlative films, tells the story of a psychopath (maybe more of a sociopath…).  Unlike those two films, though, Schüler does not struggle with the moral implications of his actions.  This is in part due to the fact that he is actually successful at what he does (professionally, anyway).  The prologue of the film doesn’t lay bare that he is a fraud perpetrating atrocities on people.  If anything, it’s the opposite, and we’re told this through his lackeys who comment that they have seen the doctor’s work firsthand restoring a child’s face.  Ms. Morley’s surgery was botched because she was trying to rush the procedures.  Her high-class sense of immediate gratification thwarts her own ends.  The audience doesn’t see Schüler’s previous successes, because one, Martin and Angela have no reason to deceive each other in private about the skills of their Teutonic compatriot, and two, the sight of Evelyn’s ugsome face attached to her come-hither body is both provocative and off-putting.  Of course, Schüler’s rampant narcissism is both his largest motivator and his greatest deficiency.  He cannot stand to not look perfect, and he desires this in those with whom he would associate romantically, the only exceptions to this being Martin and Angela.

Also in line with the Powell and Hitchcock films, the protagonist in this film is a voyeur.  But again, Schüler doesn’t hide this fact.  Unlike Norman Bates, who stares at his guests through holes in the wall, or Mark Lewis, who stares at his victims from behind his lethal camera’s lens, Schüler stands in the wings of the big top tent and gazes longingly at his objects of desire in full view of anyone who happens to be walking by and far more importantly, in front of Angela.  Angela desires Schüler’s gaze to be on her, and it is the one place it almost never is.  She cannot compete with his ideas of perfection in beauty, and her desperate fawning over the doctor’s every whim smacks of self-loathing.  In competition with Angela for Schüler’s gaze is Nicole, whose burgeoning sexuality she wants to offer up to the man who made her beautiful and in effect, created her as she is today.  Unlike Angela, though, when Nicole asks Schüler to look at her, he gladly does so, his eyes ravishing her every time.  And it is Nicole who will take the place of the circus’s top-billed attraction Magda (Vanda Hudson) and move up a notch in the head psycho’s estimation (when Schüler asks if Nicole loves him, she states, “Of course, I do.  You gave me life.”).  That this line isn’t pursued earnestly through to the end of the film and is, in effect, dropped once the direly bland and openly misogynistic Arthur (Conrad Phillips) shows up is frustrating, as it feels like the filmmakers went for the easier path, when they could have explored some truly dense and twisted areas of the human psyche.

In a bizarre “beauty and the beast” way, Schüler enjoys looking at the obliteration of that which he bred and which has turned against him.  The women who he has transmogrified into beauties eventually reject Schüler’s amorous attentions, and since he cannot have them, no one can, and they must die.  His vainglorious nature calls for the death of those which he feels he deserves above all others.  And since his murders are all constructed to appear as accidents, he can smugly watch out in the open, innocence in his appearance, arousal in his gaze.  His hubris is boundless, and it requires constant feeding.  But like the cantankerous “gorilla” with whom he shares an animosity, ultimately it is Schüler’s inner base animal which will devour him.

MVT:  Anton Diffring’s performance is the perfect blend of charming exterior and chilling interior.  He doesn’t need to go big to get his point across, but even when he does, he is always convincing and disturbing, by turns.  This is a man you don’t want to be around, and the actor captures it masterfully, I think.

Make Or Break:  The knife throwing scene Makes the film for me.  We know what’s happening, we know what’s coming next, and even though the tension in the scene builds nicely, there is still a sense of aloofness in its depiction.  It’s almost as if Hayers is placing the audience in the same visual space as the film’s villain (something done throughout the film but which stands out in the murder scenes), so that we have the chance to experience the gaze the way Schüler may.  That we feel horrified rather than spent (or I did; I don’t know about you) at the scene’s climax is what differentiates us from the Schülers of the world.