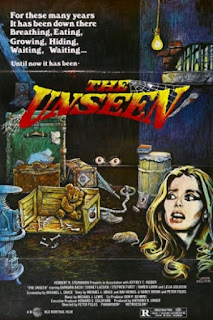 I don’t really get sick.  Oh, I get a nice head cold once or twice a year, and I have hay fever that would debilitate a lesser man, but it’s rare for me to contract something akin to the flu (and bear in mind, I’m in and out of multiple people’s houses everyday in the course of my job).  I don’t chalk this up to having an iron constitution or anything of the sort.  As a matter of fact, I’d probably just call it dumb luck.  However, when I do get the flu, I get it bad.  I don’t just get a fever, headache, and nausea.  I get a high fever, migraines, and a stomach so twisted it’s nothing short of crippling.  Often, this also leads to fever dreams which, for as bizarre and interesting as they are, I could frankly do without on the whole.  What I’m getting at is even at my worst, even when I’m vomiting so much and so hard that it feels like the only thing I have left to bring up is my own anus (if it were someone else’s, I’d really be worried), I have never coughed during the act.  This is one of those cinema tropes which has always bugged me, that people will spit up a bit and then erupt in a coughing jag that would make a “lunger” green with envy.  I get that it’s called “acting,” but to my mind, this is the kind of thing that’s simply not true to life.  Even in Horror movies.

Television reporter Jennifer Fast (Barbara Bach) walks out (ironically enough) on beau Tony (Doug Barr, who you may recall as Howie Munson on TV’s The Fall Guy), who has recently undergone knee surgery.  Traveling with sister Karen (Karen Lamm) and assistant Vicki (Lois Young) to the hamlet of Solvang (an anagram for Vanglos, in case you were wondering), the three find the local hotel completely booked up.  Coming upon the Union Hotel and its not-at-all-creepy proprietor Ernest (Sydney Lassick) they ask for a room, but are informed that it’s just a museum.  However, he can let them stay at his house, where fragile wife Virginia (Lelia Goldoni) takes care of things.  But the horrors to come are still (wait for it) unseen.

If my synopsis for Danny Steinmann’s (director of the Linda Blair vehicle Savage Streets, here credited as Peter Foleg) The Unseen seems a bit slight and not all that scary, that’s because the film is a bit slight and not all that scary.  It has all the elements for a Horror film, and it puts them mostly in the right order.  Nonetheless, the filmmakers don’t seem to want to focus on the people ostensibly set up as the heroines of the piece.  If anything, this is more the story of the twisted Keller family, and had they played up the skeezy, gothic elements associated with them, this could very well have been a decent little Psychodrama.  Instead, they tried to force a standard Slasher structure onto the film, and I feel that it suffers greatly as a result.  It also doesn’t help that the acting seesaws between wooden and manic (with Lassick earning the coveted BEM Award for overdoing it this time out).  Sure, the viewers’ fingernails will dig rivulets into their arm rests, but it’s strictly a reaction to the thespian skills on display and the film’s lumbering plot, not due to any tension constructed by Steinmann and company.

It’s impossible to discuss this film in any detail without some form of SPOILERS, although it could also be argued that this is an unspoilable film, since one of the big twists (out of two) is only a twist in its appearance and has probably been discussed more than Rosebud (okay, not really).  Ready?  Here we go.  So, former Flounder Stephen Furst plays Junior Keller (aka the titular Unseen), the large mongoloid offspring of Ernest and Virginia who have kept him locked in the basement, assumedly since he could walk (and not in the attic where this sort of familial black eye is normally secreted away).  He is the murderer of two of the female characters, but it is Ernest who is the true villain of this flick, and we get that simply upon first sight.  Why else would you cast Lassick, unless you were looking for an unctuous yet somewhat effete character that is instantly untrustworthy and unlikable?  Regardless, it is Ernest’s relationship with not only Junior but also Virginia which underpins the major themes in the movie.  That the filmmakers tried to have these same themes mirrored by Jennifer and her relationship with Tony is admirable but also ineffective (I can only assume they couldn’t afford Bach’s salary to keep her onscreen longer).

The first of the major themes is one of children and parents, specifically mothers.  Virginia is a mother in a very traditional sense.  She stays at home and takes care of the house and cooks and cleans.  She is also abused mentally and physically.  Jennifer, by contrast, is an independent woman and doesn’t want a child at this point in her career.  She has repressed her mothering instinct (though it can just as easily be argued that she has none as portrayed in Bach’s icy performance), and this is conveyed in the first scenes of the film.  Jennifer walks out on Tony as he struggles to lift weights with his repaired knees (and Steinmann’s insistence on showing a closeup of his scar drives home the point that Tony is an incomplete man and in need of someone who can care for him, though not to the point an infant would).  Naturally then, when Jennifer is confronted with Junior, she must essentially face “the return of the repressed.”  What she has attempted to kill in her own life now threatens that life in a much larger (and terminal) fashion.  What’s interesting (or at least befuddling) is that we are given no indication as to how any of this will affect her life in the future.  We see the actions that she takes, but it is difficult to believe that her ordeals will strengthen her maternal impulses and change her mind about having a child of her own.  In fact, I wouldn’t be surprised if she had her tubes tied after the film fades out.  Again, the film’s focus is rooted in the Kellers (not the outsiders), and it is how Virginia and Ernest act which depicts any character growth.

The second theme I’d like to touch on deals with forgetting and burying the past (which can also be read as guilt).  Here, we should be paying attention to Jennifer and Tony in this regard, but pretty much everything which the filmmakers have to say about the two is put out in the first scene and then all but hung out to dry.  No, it is the Kellers who encompass this theme almost in its entirety.  Virginia has been scarred by the past actions which have formed her present situation.  Junior is a living embodiment of the malignant past which birthed him (though he acts merely within his severe limitations and without malice).  Ernest, who is the catalyst for everything bad in the Kellers’ lives, is himself a victim of the past.  Yet in the past, when Ernest acted out to escape from the cycle of abuse which defined his young life, he only made things worse and progressed (some would argue regressed) from there, thus further perpetuating the cycle.  He owns a hotel which was turned into a museum, a place and livelihood literally trapped in the past.  To be fair, there is a certain richness in this material.  The filmmakers just didn’t dig into it past a surface level, and consequently The Unseen is a film which should resonate but ultimately doesn’t.

MVT:  Furst’s Junior is the standout of the film.  For the first few minutes he’s onscreen, he is moderately impressive and not a little creepy.  Unfortunately, when he starts doing things which are a bit on the ridiculous side (in Furst’s defense, a preoperational child would very likely behave in the same fashion), any sense of unease quickly turns to comedy.  It’s a shame, really.

Make Or Break:  The Break is the scene where Ernest gets drunk and has a conversation with a family member.  Not only is it leaden with hamfisted exposition, but it also gives us some truly overwrought acting which just crushes any expectations you might have for the film’s remainder.