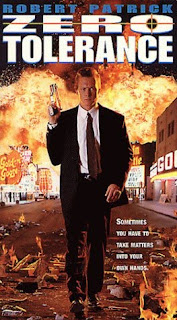 “Zero Tolerance” has quite a few qualities that I love in an action film; guns and explosions (naturally), wacky villains, it takes place (mostly) in Las Vegas, is set during Christmas and stars Robert Patrick. Never mind that it’s a run-of-the-mill revenge thriller that doesn’t do anything out of the ordinary plot-wise. Jeff Douglas (Robert Patrick) travels to Mexico to apprehend Ray Manta (Titus Welliver), a drug pusher who’s a part of the White Hand, which is not like the Ku Klux Klan (that’s proven by the inclusion of LaFleur (Jeffrey Anderson-Gunter), a Jamaican drug pusher).

Some of Manta’s lackeys commandeer the vehicle he’s traveling in and kill Douglas’ two partners. They’re quickly disposed of by Jeff who amazingly steers the wheel while his dead partner’s foot is lodged on the gas pedal. He’s also able to shoot at the motorcyclists chasing him until he hops out. Naturally, cars catch on fire and they explode. That happens a lot on this film! I can’t think of another action film with this so many cars on fire than “Zero Tolerance”.

Just as it seems Manta has gotten away, he sneaks up on Douglas and puts a gun to his head. Ray needs to transport a shipment to his partner, Helmut Vitch (Mick Fleetwood), in Las Vegas. Since he’s a wanted criminal, the only way he can make it past the border is with an FBI agent. Knowing Jeff wouldn’t oblige simply via a gun to the head, he has his family taken hostage. If he takes him to Las Vegas, they live. If not, they die.

As Jeff asks Ray if they’re still alive throughout, he’s consoled with this statement: “Of course they’re alive! I’m not some sick scumbag!” He is some sick scumbag. Jeff’s family was murdered immediately after he agreed to the assignment. He was set up to die as well, as the limo he traveled in was rigged to explode. For reasons unknown, he hightails it out of the vehicle just in time (though he’s hurled onto another car, then run over by a truck) and saves himself. My guess is he seen the drivers and other passengers slowly escaping and thought something was fishy.

The White Hand thinks he’s dead, he finds out his family is and, after being taken off the case and put on mandatory vacation, takes justice into his own hands. He starts in Las Vegas by storming into Vitch’s casino and shooting him point blank in the skull while playing poker (which was badass). From there, he travels around the States tracking down the rest of the gang. He’s stripped of his badge, but his former boss isn’t having anybody following his tracks. We learn he actually gave Jeff an alias and wants him to kill the White Hand. Once he does, he’ll be taken into custody and be put in the gas chamber.

Megan (Kristen Meadows), being the leader of his fan club, learns of this and follows his trail in order to save him. She understands his anger, as her mother was raped and murdered by a hoodlum who’s living scot-free in Florida, but knows killing him won’t bring her back and will only cause her trouble. This is a thankless role that Meadows handles well. Nobody wants to be the voice of reason in an action film, as most of the audience will be rooting against her (we want to see the bastards get their comeuppance). She does her best to not only convince Jeff why this is wrong, but also the audience. I’m not saying it worked, but she tried.

From that plot description, you can probably guess where this film is going. You can probably send me a message detailing the plot points. While watching the film, you don’t really care about that. It’s a standard revenge thriller and you’re happy that it is. You want the comfort of familiarity. You’re just hoping you get many scenes of Robert Patrick being a badass and mowing down drug pushers. You get a lot of that and will be thoroughly pleased by it!

MVT: Joseph Merhi’s direction. While he’s so-so working off the dialogue scenes (from the script written by Joe Hart), he handles the action phenomenally! It’s not groundbreaking stuff, but it’s highly entertaining!

Make or Break: The scene where Douglas shoots Vitch point blank at a casino in front of anybody. Not only was this badass, it showed that Jeff had lost all sense of right and wrong and wasn’t going to be doing everything smoothly. Sure, he’ll be a one-man wrecking crew, but not a smooth one.