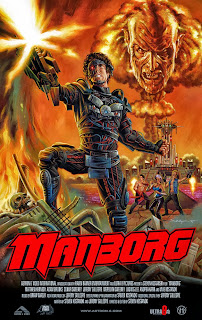 I do not get nostalgic about the past often but this movie makes me miss the video rental place I used to frequent in the late 80's and early 90's. Because this is the kind of movie I would have rented repeatedly from them. It alsois one of those movies I can come back to years later and not wonder what was wrong with me when I was a child. So with less rambling here is a spoiler free review of Manborg.

The movie opens with a squad of soldiers providing covering fire for civilians fleeing the demonic army. Our hero Man is severing in the same squad as his brother the Sarge. The squad is able to hold of the demon troops and even kill one or two of them until Draculon leader of the demon army shows up. Then the squad starts taking loses leaving only Man left alive in the squad. So Man charges Draculon, against his brother's orders and manges to hold his own with a empty rifle. Man's brave attack is no match for Draculon's evil and Man is deafeated and killed by Draculon's forces.

Man's body is dragged away as the opening credits start. While the opening credits roll the stop motion montage shows how Man becomes Manborg. Many years later Manborg awakens and unsure as to who he is or where he is. So he decides to wander around and get a good look at the dystopian hell on Earth. This takes him right into the path of #1 Man, a skilled martial artist and one time trainer of hell's armies. However Manborg's reluctance to fight the demon forces and Shadow Mega gets both Manborg and #1 Man captured and taken to demon's base.

At the base prison we are introduced to the brother and sister duo of Justice and Mina. Justice is an annoying gun fighter and Mina is the arena's favorite knife welding darling. We are also introduced to the Baron, the demon who runs the base and behaves like a lovesick moron around Mina. But this is boring so let's dump the main characters in a gladiatorial arena.

In the arena, #1 Man, Justice and Mina show off why they have lived this long by wiping out most of the demon gladiators. Manborg however is still learning how to use his new body and nearly shoots Mina. After the arena fight #1 Man, Justice and Mina turn their backs on Manborg. To make things worse Manborg is sent to fight the ultimate killing machine in the arena. After an impressive battle, meeting Doctor Scorpius and getting a future tape, Manborg frees the other main characters from the prision.

The four heroes escape to wastelands just outside the city. While in the wastelands, Manborg learns more about himself and we have the mandatory training montage for the third act fight. The third act resolution and epic battle is just pure awesome. The follow up extended trailer Biocop, every cop movie cliche is happening around a cop who is unstoppable biological nightmare. Also watch the text crawl at the end of the movie. It is the funniest international copyright warning you will ever read.

MVT: The effective use of practical and computer generated effects.

Make or Break: The make for me is the scene in the wastelands. The character Justice is talking about the mutants wandering around and he talks about "a man with a cabbage for a head". The break for me was the character Justice. I just found him annoying.