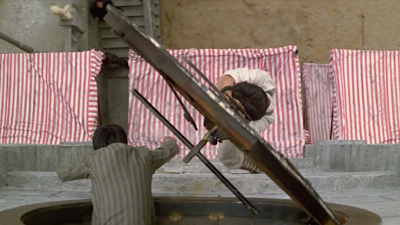 So much action that there's no need for a story, but oh, is there a story!

I've never claimed to be well versed in the worlds of action films or an expert on Hong Kong cinema. That being said, in the few films that combine both of those factors I have noticed a problem with the handling of story. Sometimes action is all that is needed, and 'A' gai wak is an example of a film where its action is enough to make any cinephile happy. I don't know the reasons behind 'A' gai wak's lame story, but it exists and it adds nothing to the film. It detracts from the film, and took the focus off of the excellent martial arts action. As I explore more Hong Kong action I'm hoping that either the stories will get better or story will be dropped in favor of action.

Even with the detrimental story 'A' gai wak ends up a damn fine film. The reason for that is simple, its action is supremely well choreographed. There's an energetic immediacy to the action and a display of physical object use that dazzles the eye. It's one thing to see Jackie Chan duke it out with incredible martial arts skill. It's another thing entirely to watch Xiānshēng Chan use a bicycle to hit a water dish in the face of one of his foes. There's an understanding of where objects are in 'A' gai wak that makes for an interesting watch. Dissecting action scenes is always something I have fun doing, but I had a giddy grin on my face when trying to discern the various ways that the actors in 'A' gai wak made use of the physical objects around them.

Xiānshēng Chan is an actor whose work I have seen in the past. To be perfectly honest I was never a fan of Xiānshēng Chan. Looking back now I see some impetuous youth on my part, as I watched one film that left a bad taste in my mouth and that led me to harsh views of all the Xiānshēng Chan films I watched. I'm glad I took some time away from the man, 'A' gai wak is the first Jackie Chan film I've seen in around ten years (Not counting The Karate Kid). Removed from my initial experience all those years ago I see a true artist at work in Xiānshēng Chan. He is acrobatic, has great comedic timing, has a physicality I appreciated, and is clearly giving it his all in every second of 'A' gai wak. The same could be said of Sammo Hung Kam-Bo, but this is the first film of his I have seen so I'm reserving any declarative statements on his ability until I have seen more of his work.

The story in 'A' gai wak is atrocious, but it's balanced out by the energetic and inventive action. The fact that I described the story as atrocious and yet still say that the action balanced it out should tell you how highly I think of the action on display in 'A' gai wak. It could have been a great film, but the story does hold 'A' gai wak back from reaching such a high mark. As it stands 'A' gai wak is a decent film with fantastic action. Most importantly it's put me on the path of seeing more from Jackie Chan and Sammo Hung Kam-Bo. Taking the abysmal story into account that's one heck of a ringing endorsement for the action and the entertainment those two men are capable of providing. 'A' gai wak is fun, and the action thrills, but that story, oh man, that story.