Sword of the Valiant: The Legend of Sir Gawain and the Green Knight (1984) 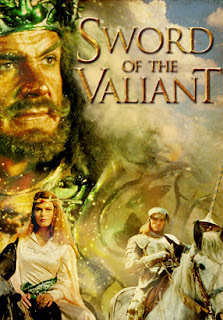 This movie is very loose adaptation of the Arthurian poems about a green man and or a green knight, Sir Gawain and game that involves cutting off someone's head with an ax. The movie has silly wigs, shiny suits of armour, more silly wigs, sword fights, jousting and a bronzed Sean Connery in weird green armour. So let's look at this Golan and Globus swords and weirdness epic.

The movie opens with Squire Gawain (played by Miles O'Keeffe) shirtless, wearing a He-Man wig and showing off a sword. After the credits the scene cuts to a great hall were The King (not Elvis sadly) is rather upset at his knights. Of late The King's knights were struggling with getting up at the crack of noon and combating getting everything the first time from the buffet table.

The Green Knight decides to hold off for a year before taking a swing at Sir Gawain neck and tells Gawain to go live his life. The Green Knight also gives Gawain a riddle to solve. So Gawain and his squire go out into the world to live a little and to solve the riddle. Adding to Sir Gawain's problems is the fact that he nor his squire have a clue what to do next. But Morgan Le Fay (Arthurian femme fatale) knows of a black knight that needs his butt kicked.

Sir Gawain and his squire seek out the Black Knight and fight him to be admitted to the unseen town. This leads to the funniest part of the movie were Sir Gawain's squire points out that his armour is was meant for display and not combat. The Black Knight is defeated and mortally wounded. So Gawain agrees to take the
Black Knight to the town and become the town's new defender. At the town Gawain learns a valuable lesson that black knights are dicks. The Black Knight accuses Gawain of murdering him.

Naturally the town folk want Gawain's blood and his smart ass squire got lost on the way to the town. So Gawain runs for his life and right into the movie's love interest Linet and her magic ring. She helps Gawain escape the enraged mob and accidentally helps to get him married. So Gawain and Linet run away hoping to escape the town. This plan fails because the guards find enough brain cells to lock the gates and because Linet keeps being captured by guards every twenty seconds.

Linet understanding that she is a guard magnet gives Gawain her ring and encourages him to jump from the castle. So Gawain jumps and the plot comes to crashing halt. Up until this point, everything that has happened so far is part of The Green Knight's game. But Morgan has been interfering in this game and she gets turned into a toad for her trouble. The Green Knight taunts Gawain back into playing his game as soon as he find the plot reboot wizard.

Gawain meets the plot reboot wizard and he finds himself back in Linet's mysterious town but now everyone is frozen and covered with cob webs. He find Linet and brings her back to life with the ring she gave him and the two of them run off. However Linet manges to gets captured again, this time by some baron's son and Peter Cushing. So Gawain finds his trusty squire and meets a friar who has stolen from the same baron a few times.

Our trio of heroes sneak into the baron's castle, recruit some red shirts, plan a way to save Linet and then set the castle on fire. Again Gawain is without a love interest, armour, a squire to think for him or a clue as to what to do next. However Gawain manages to wander to Baron Let's Get The Plot Moving There Is Only Twenty Minutes Left In The Film's castle. There he meets Linet again as she managed to escape despite Gawain's help and gets a suit of gold armour.

Linet gives Gawain a favour that will prevent any harm to come to him and he rides out looking for a fight. Gawain's squire, the red shirts the squire recruited and the friar from earlier have shown up to be team good guy. Team bad guy made up of the baron's son and his group of thugs. So the epic final battle takes place and Gawain slays the baron's son and meets The Green Knight again. The Green Knight tells Gawain it is time to have his head cut off and that he should go to the Green Chapel.

At the Green Chapel, Gawain waits for The Green Knight to cut off his head. The favour Linet gave Gawain does it's job and get destroyed instead of Gawain's neck. Then Gawain and a rather pissed off Green Knight fight and Gawain defeats the Green Knight. So the hero goes to collect the love interest and end this movie but Gawain is in for a bit of a shock, Linet was only allowed a year to get captured and be the love interest. She explains this to Gawain and then turns into a bird and flies off. The End.

MVT: The scene with Gawain's squire pointing out how useless his armour is against someone with real plate armour.

Make or Break: What makes this movie for me is Sean Connery and the over the top medieval craziness. The break for me is the jarring pace of the plot. It will move along for a bit and then abruptly stop change direction and move at another pace in another direction.