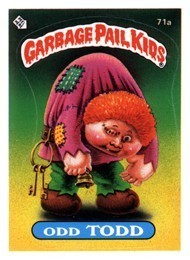 When Tod Browning directed the brilliant Freaks (released in 1932, but shelved by MGM due to moral backlash more than anything, though it is readily available today), he accomplished two significant things (actually more, but for our purposes today, these two will suffice). One, he used real sideshow performers to portray the titular characters, horrifying audiences to the point of revulsion (and I believe the spectacle/exploitation angle was at least partly a conscious choice on Browning's behalf, though the opposite can also be argued). And two, he made the "monsters" the heroes of the piece, and the normal people (nigh-perfect physical specimens) are the beasts. Monsters (certainly the ones that have endured the longest) have often had some element of pathos to them, but never before (at least to my memory, but that's like Swiss cheese these days, so…) had viewers been asked to side with characters so antithetical to what they expected from their cinematic protagonists. Eventually (and some would say inevitably), the transgressive became the norm, and the heroic creature is as commonplace and accepted today as the hunky, all-American hero was then. 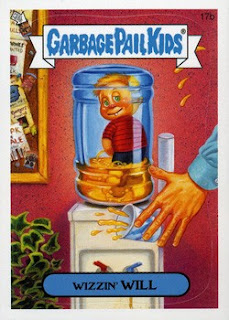 Dodger (MacKenzie Astin) is a skinny pantywaist who is beat up and robbed by stereotypical fiends, Juice, Wally, and Blythe (Ron MacLachlan, J.P. Amateau, and Marjory Graue, respectively). The problem is Dodger has the pubescent hots for Juice's squeeze, Tangerine(Katie Barberi, who was only Astin's elder by about a year but appears to be a good ten ahead of him), who sells her homemade clothes outside the local dance club and dreams of being a big time fashion designer. Dodger works for the loveably semi-absent-minded ex-magician, Captain Manzini (the late Anthony Newley), at the Captain's miserable antiques store. During an altercation between Dodger and Juice's gang, an (antique?) garbage pail is accidentally knocked over. Crawling out of the Slurpee-esque slime come seven broad gross out characters: Valerie Vomit (Debbie Lee Carrington, I assume voiced by Annie Wood), Windy Winston (Arturo Gil), Foul Phil (Robert Bell, voiced by Chloe Amateau), Nat Nerd (Larry Green, voice by Jim Cummings), Ali Gator (Kevin Thompson), Greaser Greg (Phil Fondacaro, voiced by Cummings again), and Messy Tessie (Susan Rossitto, voiced by Teri Benaron). Chaos is the order of the day, hilarity ensues, and we all learn a valuable lesson. 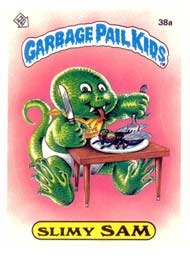 When the first credit on a film reads "A Topps Chewing Gum Production," sure as ten dimes buys you a dollar, you're in for a world of hurt. Fads have crossed over from their original forms into other media long before Rod Amateau's The Garbage Pail Kids Movie. The video game boom of the 1980s gave us such Saturday morning classics as "Saturday Supercade," "Q-Bert," and "The Legend Of Zelda." At that time, literally anything that had legs as a product for the ten to sixteen year old demographic spun off into multiple formats/forms. We had "Rubik The Amazing Cube" cartoons, Pac-Man breakfast cereal, Smurfs albums, and on, and on, and on. 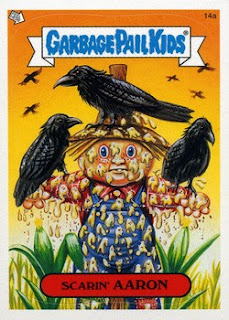 Around about 1983 or so, Cabbage Patch Dolls became THE toy for every girl to have. The furor over these products was so high, grown adults would have fist fights in store aisles trying to snag one for their child (but I'm sure this sort of thing no longer happens). In 1985, Topps released their first series of Garbage Pail Kids trading cards and stickers, parodying the cloying twee factor of Xavier Roberts's cherubic creations with grotesqueries and toilet humor, courtesy of the series' creator, Art Spiegelman. Needless to say, kids ate them up (including the razor sharp "chewing gum" included in every pack), parents hated them, and Topps executives cashed in.

What this film centers on, at least in theory, is Dodger's maturing into young adulthood and the ineluctable loss of romantic idealism brought upon by the harsh realities of the real world. The Kids serve two purposes, thematically. They serve as (supposedly) empathetic characters for the awkward, the abnormal, and the unattractive, as children just running headlong into puberty invariably feel, but they also represent those who are truly not the norm. On the other hand, they act as the anarchic id all kids revel in, because they flaunt the rules of normality. Unlike the dolls they were created to mock, the Garbage Pail Kids are dichotomous. They crave acceptance for what they are from society at large, yet their behavior is so unapologetically antisocial, the only ones who would have them are those who have "been there" or think they have (read: pubescent youth). 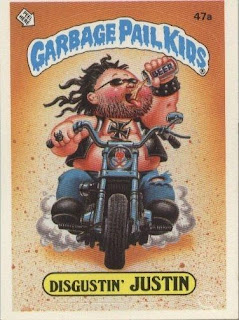 The depiction of The Kids, unfortunately, is resistant to any empathy a viewer may feel towards them. Nat Nerd literally pisses himself at least four times during the course of the film. Honestly, when you see this type of thing in reality, one's first reaction is not to laugh (unless the self-micturation is done as a deliberate act, instead of an involuntary reaction, but even then…really?). Windy Winston farts in people's faces with impunity. Ali Gator eats people's toes. All of them partake in grand larceny at one point or another. You get the idea. They go beyond merely being outcasts; they become alien, not just in their appearance, but in the audience's inability to reconcile the love/hate relationship their nature engenders. It's one thing to have friends who look odd or behave oddly. It's another thing if said friends persistently try to eat us, knife us, or slather mucus on us. Some things are simply not done, old bean. 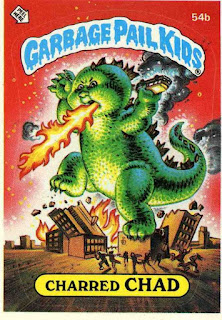 This makes the film's message a trifle mixed. We get that the outwardly good-looking Juice and his gang are ugly on the inside. Conversely, The Kids, who should be the polar opposites of the antagonists, only distinguish themselves from them in their assistance of Dodger as a makeshift sweat shop for fashions that Tangerine uses to advance her own venal concerns. It can be safely stated that the filmmakers are trying to serve two masters with this film. They want us to fall for these oddballs, to look beyond the "warts" (and zits, and snot) to what lies beneath the surface. Meanwhile, they rejoice in shoving the audience's faces on the aforementioned "warts" and rubbing them up and down. There are only two characters worthy of the term "likeable" on any level. One is a sniveling, horny youngster. The other is a magician, nostalgist, and borderline child abuser who wants rid of The Kids, knowing they're nothing but trouble. And unless you're a diehard fan of John Carl Buechler's low budget animatronics (which are commendable considering the film's budget would probably make a shoestring look like a four lane highway), that's how you'll treat The Garbage Pail Kids Movie. Nothing but trouble.


MVT: Buechler's character creations have always had a charmingly threadbare appeal to them. The Kids are no different. The voices don't come close to matching the lip movements. The facial expressions are wildly broad and mostly inappropriate. But for makeup effects devotees, they're great to watch in action (despite their only slight effectiveness).

Make Or Break: The Kids break out in a musical number from out of the blue. You'll either savor it for its ridiculousness and inexplicable abruptness, or you'll roll your eyes and long to smash your face against the nearest piano like Don Music. I'm in the middle but leaning moderately towards the "Make" end of the equation. The rest of the movie? Not so much.