REVENGE OF THE TRAILER - EPISODE 3 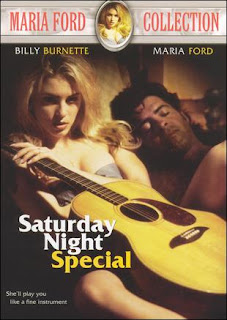 Fans of the GGTMC have asked for sex, seduction, mullets, country western music and something cinematic that features a cameo by the legendary Mick Fleetwood.  This week, Shock Cinema Magazine's own and host of The Mondo Film Podcast Justin Bozung brings you a chord or two about the 1994 southern Texas noir, Saturday Night Special.

Produced by Roger Corman and directed by Dan Golden, Saturday Night Special is the tale of a honky tonk musician named Travis (Fleetwood Mac's Billy Burnette), who drifts into a small town in the middle of nowhere Texas and takes a job at a bar as their featured musical attraction.  Enter the sexy Darlene (Maria Ford), the beautiful and submissive wife of the rowdy, fishing obsessed and abusive bar owner, T.J. (Rick Dean).  In true film noir fashion, Darlene seduces and sexes Travis into getting rid of her husband, so the two can live happily ever after.   But as is noir tradition, the plan doesn't works out as fate is a real motherfucker.

While many today are focusing on the late '70s and early '80s horror/sci-fi and exploitation films of the great Roger Corman (thanks to Shout Factory!) no attention has yet been given to the Corman '90s, as this decade of his prolific career and his direct-to-video output is must see. I've dubbed it.. naked noir.


MVT:  The cast, in particular the performances of Rick Dean and Maria Ford.  Ford is one of the most under-rated actresses of her era.  There is a specific and unexplainable innocence that radiates from her as well as a strong and powerful oozing sensuality that will leave any audience pleading for more. Ford is that girl next door that became the cheerleader in your high school that you fantasized about doing very dirty sexual things to.  On initial viewing of Saturday Night Special, Ford's performance at times could be construed as transparent (at the fault of the screenplay), but given the traditional conventions of film noir and the femme fatale aesthetic, Ford becomes a sort of anti-femme in that her performance contributes to the transcendence of the genre's character limitations.   Unlike Barbara Stanwyck in Double Indemnity (1944) or Lana Turner in The Postman Always Rings Twice (1946), Ford as Darlene doesn't solicit male sympathy (as is traditional pattern) from her victim(s), she seduces with purely deviant sexuality and perverts the traditional role into that of becoming a living and breathing "glory hole" for the Travis character.

These characters have no redeeming social or moral values and the audience doesn't have the want to care for any of them.  This is what makes Saturday Night Special a true standout.

Rick Dean.  The Marlon Brando of B cinema.  Dean, while relegated to playing the "heavy" in everything he worked on during his lifetime, is an incredible character actor who left this earth too early.  Big, brash, greasy and full of self destructive demons, Dean was a unbelievable talent that never got his due.   Both Ford and Dean should have been A-list actors working on bigger projects.

MAKE OR BREAK:  Dan Golden.  Without the visual style of director Dan Golden, Saturday Night Special would be as forgettable as it's first incarnation, Kiss Me A Killer.   Golden is a truly under-rated filmmaker.  Saturday Night Special comes to us with great art direction, cinematography and editing.  With Golden behind the camera, Ford and Dean pushing the story, you can feel the soft core heat coming off your television as if it's a cheap space heater about to burn down your house. Keep a flame extinguisher near by, and for the love of God check out the other films from the Corman/Golden/Ford/Dean team. In particular, Naked Obsession (1989), and Stripteaser (1995), which the later is the greatest B-movie ever made.

Posted by Justin Bozung at 6:26 AM