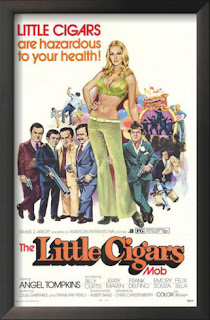 What is it about little people that makes people laugh? I know the answer is obvious; their height. However, it makes me wonder why them playing a pivotal role in a film (mainly headlining one) makes that film jump to the top of viewers’ must-see list. I hadn’t heard of “Little Cigars” until yesterday. Immediately upon discovering it, I let it jump over other films on my list to be my next review here.

There was something about the poster and premise that caught me. A mob filled with midgets (don’t mean to offend anybody, just calling it as the film does) who assist a beauty in what appears to be a “Snow White” send-up was highly appealing. Though the film is not even close to being a send-up of “Snow White” (though there is a joke regarding said film), it does play up the mob factor. Just not in the way one would expect.

For many, referring to the Little Cigars as a mob is misleading. They’re a traveling circus act of sorts that purposely perform cheap routines to distract patrons and steal from them. The first time we see them performing, two members of the group sneak into the parking lot and rob civilians. Later, they not only convince patrons to buy an average candy bar with the promise of a better sex life (just go with it), but they snatch their wallets when they’re not looking.

Cleo (Angel Tompkins) gets involved with the gang when she steals from a gangster and hightails it. When Slick Bender (Billy Curtis) offers her a position on his traveling attraction, she initially turns it down (with a barrage of midget jokes). It’s not until the gangster’s cronies catch up with her that she takes Slick’s offer and becomes his mistress, so to speak.

It’s not until the halfway point that the film kicks it into high gear. For the first half, we’re drowned in midget jokes (albeit some funny) and lame carny acts. It’s not until Cleo and Slick decide to start elevating their thievery that the film becomes engaging. They stop hustling drunken hicks and begin robbing bars and banks. The midget jokes still exist, but they become a bit more fleshed out (such as the cops mistaking the Little Cigars for children).

What holds this film back from being a memorable film starring midgets (I know, not a huge class, but you get my point) is the direction of Chris Christenberry. As slow and monotonous the first half can be, he was at least setting the characters and story up. The gangster plot which drives the film may be dry, but it was serving a purpose. It was the catalyst that brought Cleo and the Little Cigars together. Too bad it becomes an afterthought. Once Christenberry remembers to bring them back into the story, he quickly dispatches of them.

Thankfully, he does replace them with entertaining sequences of Cleo and the Little Cigars partaking in heists. The two standouts being the aforementioned bar and bank stickups. The bar one is plagued with rudimentary midget jokes, though them being dispersed by drunken rednecks makes them tolerable. When the entire gang robs them clean of their illegal gambling money, they cheerily escape, but not before stating, “If gambling wasn’t illegal in this state, you could call the police!”

The more successful heist, in terms of humor, would be when they rob the bank. The citizens being held up initially believe the gang is using toy guns, as they refer to them as toy people. Once one of them shoots their gun into the ceiling, the crowd grows quiet down and shows sign of fear. This mostly makes up for the more ludicrous midget jokes, as the perpetrator’s finally got their comeuppance.

If Christenberry had focuses his attention solely on the Little Cigars and their heists, the film would have been more successful. The gangster subplot drags the film down and has it crawl through mud before finding it’s niche. The vastly superior second half does it’s best to make up for this, making “Little Cigars” a slightly above average film. It could have been much more, though.

MVT: Billy Curtis as Slick Bender. Though all of the Little Cigars are enjoyable, he is easily the standout. His tough exterior coupled with his stature and role are fun to watch. He doesn’t shy away from hamming it up, which makes the character work.

Make or Break: Their first true heist. This was the turning point of the film, converting “Little Cigars” from a slightly laborious task to an enjoyable heist comedy.