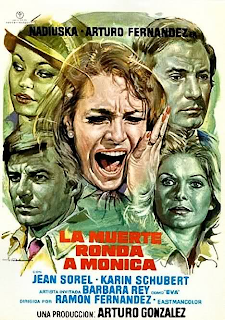 I know the term "Spanish Giallo" is sort of an oxymoron, but for the sake of giving you an idea of what the film is like, let's go ahead and call DEATH HAUNTS MONICA a Spanish Giallo. It's very much akin to the Italian Giallo film in terms of its spirit, and there's enough female nudity in this to make the Lenzis, Argentos, Martinos, and Fulcis of the exploitation cinema world proud. Plus we've got Jean Sorel and Karin Schubert in the cast, both of whom have appeared in their share of Italian genre films, including a few with a couple of the aforementioned directors.

The eponymous Monica is a lonely housewife who's married to a determined businessman named Federico. It's also important to note that she's an heiress and incredibly wealthy. The fast-paced opening act of the film introduces and establishes the group of central characters so swiftly that it's almost hard to keep up. The gist of it is that there are two relative plot threads that sort of collide at a certain point. Federico is in the midst of a deal with his company when he's suddenly visited by an old associate who just got out of prison. Apparently Federico owes this guy a lot of money, and it's suggested that their history with each other may or may not have involved the world of organized crime. Meanwhile, a female co-worker of Federico (Karin Schubert) is going behind his back and telling his wife that he's been cheating on her. This all builds to numerous confrontations involving various combinations of characters (some of whom I haven't even mentioned yet), scandal, and a situation in which Monica finds herself covering up a death that will later come back to haunt her, hence the name of the film.

To say that DEATH HAUNTS MONICA was a nice surprise would be an understatement. Trust me when I say that it's not even close to being one of the best Gialli ever made (again, it's a very loose Giallo in the first place, so it's not really fair to compare it to its Italian cousins), but what this film possesses that a lot of the more traditional Italian Gialli lack is a solid script and a story that makes all kinds of sense. It may seem like I alluded to the opening act of the film being a bit of a cluster-fuck, but it's not the case. Sure, it's hard to follow if you're not paying enough attention, but what the first act does is brilliantly set up motive before the film even establishes itself as a murder mystery or "Giallo". So, once the film finally does take that certain turn about half-way through and makes it clear to the viewer that it's indeed a murder mystery of sorts, the character development is already done. Even the supporting characters have crucial roles in the plot rather than it being a case of minor characters being established only to disappear for most of the film and suddenly re-appear towards the end, which is one of my pet peeves when it comes to Gialli. 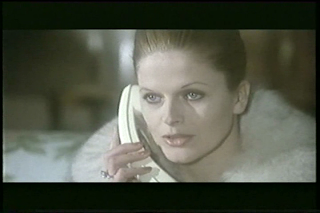 If you were to watch DEATH HAUNTS MONICA and have a Giallo checklist handy, you'd still have a lot of unmarked areas by the time it was over. MONICA doesn't feature a lot of the cliches and tropes of the genre. As I said earlier, its similarities lie in its spirit and how the mystery and thriller elements are presented. DEATH HAUNTS MONICA is more like a soap opera with a murder mystery element and the atmosphere (and plentiful nudity) of a Giallo. There's not a lot of violence to be found since this isn't a body count movie per se, and in fact there's not a drop of blood in the film or a mysterious killer going around and stalking anyone. Kinda vague, but to say much more would be saying too much. Again, not a stellar movie in the grand scheme of things, but well-crafted, well-written, and with some really good lead performances. The only noteworthy flaws of the film, in my opinion, are that it doesn't really bring anything new to the table, there aren't any standout moments (ie. death scenes) that serve as incentive for a re-watch, and that the ending is too abrupt. Other than that, it's a decent little murder mystery that fans of Gialli should be sure to check out, but it probably won't win anyone over who isn't a fan of the genre. 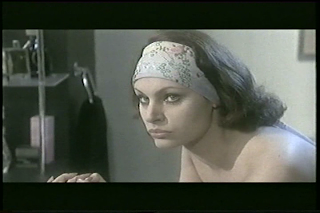 Make or Break: As I already said, while the movie is fairly solid as a whole (for what it is), there aren't any standout moments, so I'll go with the second act of the film when it reaches its turning point and certain characters - specifically Monica - are affected because of it. It's arguable that the build-up and establishing of the characters takes too long, so when the wheels are finally set in motion for the film's mystery element, it's a welcomed change of pace.

MVT: I could go with a few things for MVT, but I think lead actress Nadiuska deserves it for her performance as Monica. She doesn't exactly turn in an exhausting emotional performance or anything, but she has a great face that does wonders for how she emotes fear during some of the film's more tense moments. She's easy on the eyes as well.

The Disc: The actual quality of the picture leaves much to be desired, but at least none of the original image is lost since it's presented in its intended widescreen aspect ratio, albeit letterboxed. Spanish language with optional fan-made subtitles. Speaking of which, there are a few issues with the subtitles, but these are the same issues you tend to deal with when it comes to fan-made subs in general. Sometimes the subtitles will pop up and disappear too quickly before you get a chance to read them, and at one point there are subtitles that simply read "???", which obviously doesn't help. But considering how obscure and hard-to-find this movie is, beggars can't be choosers. Sure, the lackluster quality doesn't do the film any justice, but it's watchable (I've seen legit DVD releases much worse than this), the audio is clear, and fan subs are better than no subs at all (unless you hablo espanol). The running time is 81 minutes give or take, and to my knowledge there is no longer cut of this film anywhere.