REVENGE OF THE TRAILER - EPISODE 4 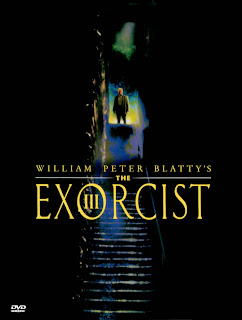 How can there be a god in this world with so much evil surrounding us?.....

It's with this question that I bring you Exorcist III aka Legion (1990).   Following the mega success of the 1973 William Friedkin directed The Exorcist, Warner Brothers approached Friedkin and William Peter Blatty about a sequel, but they went their separate ways after a disagreement on the direction of  a possible sequel.

Exorcist III, is a film that few people saw on it's initial theatrical release, but one that critics gave favorable reviews to.  With the release of Exorcist II: The Heretic in 1977, many a communal tongue was weary of experiencing this 3rd film / minor masterpiece years later, and Exorcist III still as of today have yet to find an audience to appreciate it's incredible and mysteriously dark atmosphere, surreal and scary as hell religious imagery and it's many motifs on good and evil. Originally part of a trilogy, Exorcist III would have been the direct sequel to William Peter Blatty's The Ninth Configuration (1980).

The story of the making of Exorcist III is just as interesting as the film itself. It's the classic tale of art versus commerce which still continues to make big strides today via the Hollywood studio.  In this perhaps, too long of an episode of Revenge Of The Trailer, Justin Bozung explains the inspiration behind the film, it's sorrid production, as well as the battle between the film's director William Peter Blatty and studio 20th Century Fox prior to it's release.   With too much to cover in this episode.  Please check out the below extra goodies.

BONUS: The first trailer for the film which still has the film's original title, Legion.   View Here.    The only known footage from the film that was cut that hasn't been "lost".  Watch for it at the end of the trailer. It's the footage of the head of Jason Miller as "Patent X" morphing.   It was cut, as the special effects were considered "horrible" by Blatty during the editing of the film. View Here.

Posted by Justin Bozung at 9:21 AM