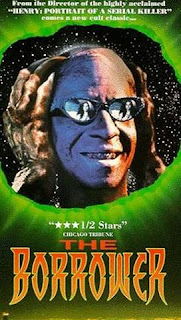 Earth is a horrible place to live. At least, that’s what I’ve learned from the movies. Anytime an alien life form or God is punished, they’re shipped off to Earth. Usually, it’s to New York City, which is ironic considering how many people dream of making it there. You know what they say; one man’s dream is another man’s nightmare. The punished victim this time is an alien criminal who is being sentenced to Earth for his penalty. Making matters worse, he’s stuck in a human body. Considering most of this blog’s readers are humans, I feel we can all relate. Every day, we wake up in a human body and simply sigh. Our alien antagonist does the same thing. That and he murders people. That’s where the comparisons end (I hope). The alien can only live in one human body for a certain amount of time. Once the body’s time runs out, he painfully transforms back into his alien self. I believe the harm in this is that his alien life form can’t handle the oxygen on Earth without a suitable body of armor. That or if he’s discovered to be an alien, he’s doomed. I honestly don’t remember. 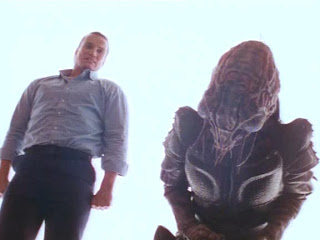 In order to survive, he kills innocent civilians and “borrows” their heads. By squeezing their head onto his body, he’s able to become an exact duplicate of them. Well, an exact duplicate visually. Mentally, he’s a blubbering idiot. This isn’t a knock against his race. They seem to be highly intelligent. His intelligence seems to dissipate once he begins wondering how many licks it takes to get to the middle of a Tootsie Pop. This leads to an abundance of fish out of water jokes. It’s handled better by John McNaughton than it is by Arthur Allan Siedelman, who directed the awful “Hercules in New York”, which I just recently had the displeasure of watching. Even so, it’s nothing more than your average bumbling confusions. He doesn’t have a grasp on the English language; he imitates others, including a hipster; he mistakes eating rats as normal. You know, the usual. 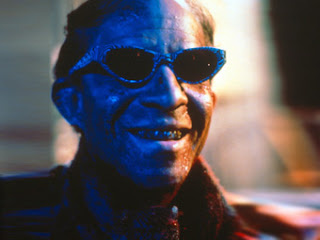 As the alien travels through New York and leaves a blood trail, the cops naturally begin hunting him down. Diana Pierce (Rae Dawn Chong) is the main cop on duty. Not only is she tracking down the alien, she’s also tracking down Scully (Neil Giuntoli), a serial rapist. Just when she believes she has him captured, he breaks free of his hospital bed by pretending to be a female cop. Surprisingly, this works. The Scully subplot eventually takes over from the main plot for a bit, which was alarming. I felt it was forced and had no place in the film. We already had a main antagonist. Sure, he was a shape shifting alien, so to speak, but that’s what we came for. The serial rapist aspect felt like more of a needless distraction than anything. It’s apparent they had the story in mind before concocting the gooey special effects (which, at this point in time, was usually the other way around). Though this is a positive, it’s almost a shame Kevin Yagher’s wonderful practical effects don’t get as much screen time as one would hope. They get enough and deliver on all fronts, but I was itching for more by the time the end credits rolled. “The Borrower” is an average fish out of water tale. Setting it apart is the head stealing alien and the tremendous effects! These make the film worth a watch, even though you have to wade through some standard material to get to them. That and a serial rapist. 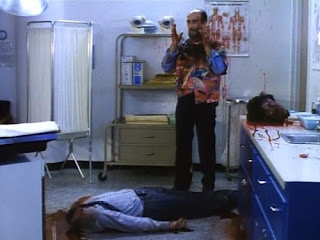 MVT: Kevin Yagher’s practical effects. Yagher is best known for creating the Cryptkeeper and Chucky doll and, at this point in time, was a hot commodity. He proves why here with his stunning effects and alien design. Make or Break: I’ll go with the alien’s first transformation into another human. Watching the incredible transformation unfold was a good sign of things to come. Final Score: 6.25/10