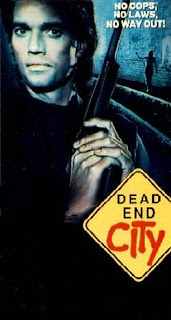 I would only recommend “Dead End City” to two groups of people. The first being those who have run the gamut on the thugs taking over subgenre. The others being those who have devoured the tastier Robert Z’Dar projects. Both are utilized here, but not to their full potential. There are delicious nuggets of both, but a lot of vanilla content in between.

The film starts out very promising. Gangs have overtaken the town with the police force not being able to strike back. Their solution is to simply give up their property to the gangs and ship the victims off to a refugee camp. Jack Murphy (Greg Cummins) doesn’t want to give up his factory due to it being a family heirloom. Begrudgingly, his coworkers (including a blind man who constantly forgets he’s blind) stick with him to defend the factory.

The gang that wants to overthrow Jack is The Ratts, led by Maximum (Robert Z’Dar). Despite him being the leader, it’s clear he’s not running the whole show. I won’t spoil who is, but it’s pretty obvious. This limits Z’Dar’s screen time, which is a huge deficit. Despite him seemingly phoning in his performance, he still brings the Z’Dar charisma that is entertaining to watch. Nobody will mistake Z’Dar for a splendid actor, but he has tremendous screen presence!

More time is devoted to Jack and his crew, which gets beefier with the arrival of Opal Brand (Christine Lund), a television reporter who brings along her crew. They’re plan is to get a quick, biased story on Jack and his coworkers, framing them to be another gang. When a real gang demolishes their car (it looks like a wrecking ball hit it), they’re stranded in the abandoned factory, as well. There’s also a hyperactive gentlemen who drops by to hide out, but he’s disposable (enough that I don’t even care to look him up).

The first action sequence, which takes place before Opal’s arrival, is extremely entertaining. Jack and company have a shootout with The Ratts that’s a little different from the norm. Our heroes stay locked up in the factory, poking holes in the walls to shoot out of. The walls themselves can be easily shot through, which poses a problem for Jack and the rest, but it obscures them from the Ratts’ view.

Once this scene ends, the film goes downhill. It never reaches the depths of drudgery, but it becomes very rudimentary. Jack and Opal fall in love, despite having no chemistry; we get to learn about the rest of Jack’s crew, who aren’t that interesting (outside of the aforementioned blind man); we learn who’s really behind the operation (which is about as surprising as a hooker having venereal diseases); Z’Dar gets limited screen time to plot with his cronies. We still get the occasional action sequence, all of which are good. They just go from diverse to average.

One compliment I must give director Peter Yuval is in the scene where Jack, having learned who’s behind the operation, goes back to the factory. When he enters, all of the dead bodies from earlier are still strewn about the building. He tiptoes over them to get to his destination. This is a small blip on the radar, but one that I really enjoyed. It was a nice, tiny touch that Yuval made that showed he was trying to be creative.

“Dead End City” isn’t a bad film. It’s definitely entertaining in spots. However, it plays by the book too heavily after the first act and has some serious dry spots. Using Robert Z’Dar a bit more would have helped, as he was his charismatic self as Maximum. He may have seemed a bit less energetic, but still fun. If you haven’t explored most of his catalogue, I suggest starting with “Trained to Kill”, “Maniac Cop” and “Tango & Cash”. If you haven’t seen many gang films, I suggest starting with “Vigilante” and “The Warriors”. If you have seen those, then seeing “Dead End City” is at least worthwhile. Just not something you need to rush out and find.

MVT: Despite not being featured as heavily as I’d hoped, I’ll still choose Robert Z’Dar. He may be phoning it in, but he’s still a lot of fun as Maximum and gives Jack a good foil.

Make or Break: I almost want to say the first action sequence made the film for me, but the arrival of Opal Brand (which is a terrible name, by the way) broke the film for me. She didn’t add anything outside of a bland love interest and led the way in dragging the film down with lame character exposition.