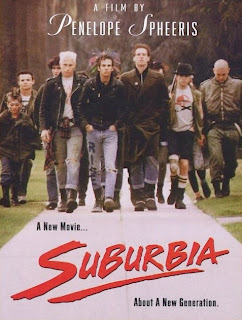 Evan Johnson (the late Bill Coyne) has had enough of his drunken mom's abuse. Alone on LA's mean streets, he soon finds himself with nowhere to go. Happening upon a venue where punk band D.I. is playing (one of their lesser songs, in my opinion), Evan is surreptitiously dosed by Keef (Grant Miner) and promptly passes out in his own vomit. He is picked up by Jack Diddley (Chris Pedersen) and introduced into the ranks of T.R. (aka the rather on-the-nose The Rejected), a group of punk kids living in an abandoned neighborhood off Interstate 605 (I believe towards the end of the line, but I'm not certain). The kids do what they have to do in order to survive but the out of work rednecks, led by Skokes (Jeff Prettyman) and Triplett (Lee Frederick, credited as Robert Peyton), want The Rejected gone one way or another.

Before Suburbia, writer/director Penelope Spheeris created The Decline Of Western Civilization, the seminal documentary many people feel is the best-made film about the world of punk rock (particularly punk rock in Los Angeles). Though I haven't seen it in at least a couple of decades, I would still agree with that sentiment (but I also recall liking Lech Kowalski's D.O.A., as well). There is a lot of the film that sticks with me even today. Of course, most music lovers who are unfamiliar with this film are almost definitely familiar with Ms. Spheeris's 1988 followup, The Decline Of Western Civilization Part 2: The Metal Years. I suspect most true punk rockers would have it no other way. 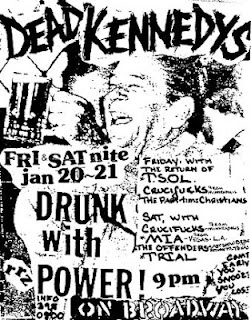 The first and most obvious observation even the most casual viewer of this film will make is the one about family. The kids who form The Rejected all come from unhappy homes of some form or another. Sheila (Jennifer Clay) was abused and molested by her father (J. Dinan Myrtetus). Joe Schmo's (Wade Walston) father (Gavin Courtney) ignores his son, only focusing on his own desires for his live-in boyfriend (Robert A. Van Senus). They're all forms of innocence lost. When we're introduced to Evan and little brother Ethan (Andrew Pece), they're both engaged in carefree, childhood activities. Ethan rides around the driveway on his Big Wheel (an image mirrored later on, and one of the most iconic of the film). Evan reads a comic book in the living room. The television airs a program and/or movie about war (visualizing the constant conflict between young and old that runs through the film). These kids' lives are all tragedies in one form or another and to one degree or another, but if they weren't, they wouldn't belong with The Rejected. The abandoned house shelters the abandoned kids who become a family more caring for one another than their flesh-and-blood relations ever did.

The second observation would be the theme of the outsider the film carries. Beyond their outward appearance, The Rejected distances themselves from normality in space, as well, squatting in an abandoned house in an abandoned neighborhood. They steal from the more upstanding members of society, but that's strictly for survival. Their presence is enough to put adults on edge in general, and their open flaunting of polite society's norms and mores, provokes outright loathing by the likes of Skokes and Triplett. At the club (read: warehouse) where they see shows, the owner tells his spotlight operator to keep the light on any troublemakers so the police can pick them out faster. He'll take their money to see bands, but he doesn't trust them even slightly. Interestingly, the only adult who does stick up for The Rejected, William Bernard (Donald V. Allen), is not only a police officer but a black one at that. The rednecks don't like him because of his skin color (even though this is implied rather than stated outright), and the punks don't like him because of his uniform and his symbolizing of authority. 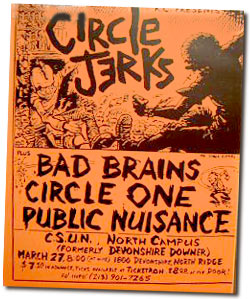 Granted, the punks also do things meant to intentionally instigate shock and outrage. They throw roadkill in someone's dryer. Jack whips an empty bottle at a bus. Razzle (The Red Hot Chili Peppers' Flea, credited as Mike B. The Flea) dumps a slushie into a jar of pickled eggs at a convenient store. If they kept their heads down, they wouldn't be messed with, but that attitude is antithetical (if you can use a term like that in regards to punk rock) to how the kids feel. The only thing they believe in is the concept that there is "No Future" for them, so who cares? Adults have polluted the planet, killed scores of their brother men, and become complacent. This heavy nihilism is represented in the film via randomized violence. The very first scene of the film has a toddler being ripped apart by a Doberman Pinscher (one of a pack of feral dogs that live near The Rejected's house and a representation of the punks as well as their enemies). Later, a security guard is accidentally shivved at a show. Naturally, if the film starts off that bleakly, it cannot end well. And it doesn't, but if this is the only future The Rejected can conceive of, then it is the only future they will realize, even though they fight back to hang onto the family they have created to the end. 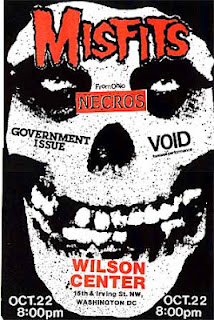 One of the great things about the film, and very much to Spheeris's credit is the level of authenticity that permeates the entire thing. Everything about what these kids do and how they act feels genuine, and the scenes at the live shows absolutely capture both the fun and the frenzy that would go down. Granted, none of The Rejected is much as far as acting chops, but everything they do feels honest, and I would argue that this is what holds the film together and engages the audience to invest in the lives of these miscreants. The filmmakers care about these characters, and this caring is evident in every frame of the film.

I can't help but ponder what this film would have been like had it been made in the late Seventies, when punk was in its infancy and literally anything went. By the time Suburbia was made, punk rock had become codified to a large degree. To be in the scene was to be both without and within a communal system (an example from the film is the insistence that the kids get branded in order to stay at the house). There were do's and don'ts to the way you looked and acted, and some of the people who prided themselves on being different had a tendency to look down on those who didn't fit that mold (sound familiar?). This is not meant as an attack on punk rock nor on any of its adherents, but it's difficult to not acknowledge that the movement had become its own enemy as much as anyone outside it. Punk was started by and for those who felt different. The problem is, when everyone is different, no one is.

MVT: As a time capsule, Suburbia captures the attitude of the LA punk scene as well as any documentary ever could, and unlike most other movies about punks or having punks in it (check out the exhaustive tome Destroy All Movies if you want to track down more), it never comes off like an act or strictly for some visual flair or as shorthand for a menacing figure. The film believes what it says.

Make Or Break: I'm going to have to go with the first scene. It's shocking, frightening, and grim. But even more so because it can happen at any moment without a reason.