Cinema de Bizarre Review of the Week: The Man from Hong Kong (1975) 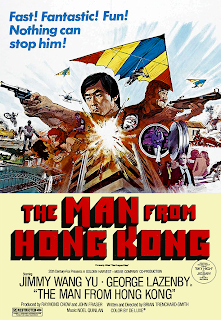 After cranking out a few made-for-TV movies and documentaries within the first couple of years of his career, legendary Australian director Brian Trenchard-Smith unleashed his first feature-length film onto the public in 1975 with THE MAN FROM HONG KONG (also known as DRAGON FLIES), and what a debut feature-length it was. It's as if he had a suppressed overwhelming desire to blow shit up on screen his entire life and this mash-up of Aussie Action and Hong Kong Martial Arts cinema was his chance to finally exorcise those demons. THE MAN FROM HONG KONG does have a plot, but we get it in between numerous scenes of car chases, foot chases, explosions, and extended fight sequences. While he'd go on to settle down in terms of the amount of action he included in his films, MAN FROM HONG KONG laid the groundwork for his style of filmmaking and established him as someone who has a genuine love for the Action genre and the stunt profession.

The film opens with a couple of undercover cops (Roger Ward and Hugh Keays-Byrne - both of whom would go on to star in MAD MAX a few years later playing people on opposing sides of the law) busting a drug courier (Sammo Hung) out in the middle of the desert. Yes, I just mentioned Roger Ward, Hugh Keays-Byrne, and Sammo Hung in the first sentence of this paragraph and I haven't even really gotten started yet. Anyway, there's a bit of a language barrier seeing as the courier doesn't speak any English, and so the cops bring in an Inspector from Hong Kong, Fang Sing Leng (Jimmy Wang Yu), to interrogate Sammo's character. Fang beats the information out of him, and an investigation begins for a local Martial Arts expert/socialite/playboy/crossbow enthusiast named Wilton (George Lazenby). Wilton sicks his henchmen on Fang, resulting in the aforementioned car chases, fights, and action sequences. 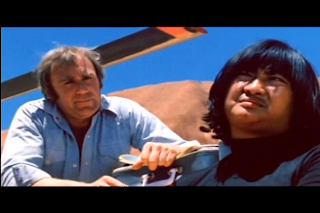 Aside from the all-star cast mentioned above, we have two very important people in the Australian film industry playing Lazenby's henchmen: stunt man Grant Page and none other than Brian Trenchard-Smith himself - in leather pants no less! Both of them get their asses handed to them by Jimmy Wang Yu, but they both put up a fight, especially Grant, whose scenes with Jimmy Wang Yu lasted a while, beginning with a chase out on the street and ending with an extended fight that starts in a kitchen of a Chinese restaurant before making its way to the dining area. To say that they absolutely destroyed this Chinese restaurant would be an understatement.

If I have a complaint about MAN FROM HONG KONG, it's that there isn't enough Roger Ward and Hugh Keays-Byrne. They have great chemistry as a pair of narcotics detectives who have a tendency to goof around, and they're believable as two guys who have developed a friendship through working with each other. There's also a bit of an odd couple relationship between the two that I personally would've loved to have seen more of a focus on. You have Ward's character who's always in a suit and tie, whereas Byrne is usually dressed like he's Robin Hood or something. It's not that they're screen time is limited or anything, but at a certain point they take a backseat as more of the film focuses on Jimmy Wang Yu's character as he beds Aussie women and fights crime. Speaking of which, there are a lot of behind-the-scenes stories that don't exactly paint the Hong Kong star in the most positive of lights, but that's a discussion for another time and place.

As I said, the film does have a plot, and it's a pretty basic plot about cops trying to put an end to a drug ring. At the end of the day, though, it doesn't really matter what this movie is about, and to be critical of the plot and storytelling is missing the point. MAN FROM HONG KONG is essentially a showcase of stunts that was made to entertain and "WOW" audiences, with a plot as a means of getting from one action set-piece to the next and justifying them. Anyone who's familiar with Brian Trenchard-Smith's work knows that it wouldn't be one of his films without some sort of vehicular destruction, and this film has plenty of those. I lost count, but there are at least three or four exploding cars in the film, not to mention a number of chase scenes and driving that would be better suited in a demolition derby than a highway. One of the early car-splosions in the film looks to have been the perfect accident as a rather large piece of the car flew at the camera like a frisbee and seemingly missed it by only a few feet. In another car-related stunt sequence, a car drives right through a fucking HOUSE and keeps going! Well, it doesn't make it very far, but it keeps going nonetheless. And explodes of course.

MAN FROM HONG KONG is obviously no CITIZEN KANE, but it's a fun, spectacular film that should hit the sweet spot for anyone looking to just sit back, relax, and watch something entertaining and macho that requires no emotional or mental investment. Not only that, but you get a cast of legendary genre actors in the film as well. It should also be said that George Lazenby is great as the villain and seems to be having a ball hamming it up on screen (when he's not on fire). Highly recommended. 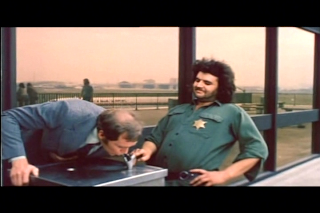 Make or Break: So many to choose from, but I'll go with the final "boss battle" between Jimmy Wang Yu and George Lazenby.

MVT: The stunts. And this includes not just the set-pieces themselves, but the stunt people who executed them as well.

The Disc: It appears to be a cropped version of the original print. MAN FROM HONG KONG was shot in 2.35:1 widescreen aspect ratio, and the black bars at the top and bottom of the screen are still in tact, but the sides of the picture are cut out. Also, the quality leaves much to be desired. Not a pristine DVD-quality print by any means, but it's watchable and still much better than a beat-up VHS rip or something. And be warned that the sound is incredibly loud, so if you normally have the volume on your television or sound system turned up, you might wanna start the film with the volume low and adjust it from there. Clear and audible, but loud. English with no subtitles.